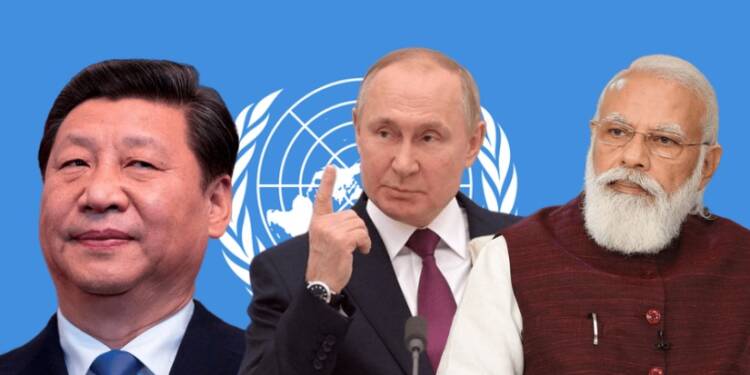 India on Friday abstained from an anti-Russia resolution on Ukraine in the United Nations Security Council. The resolution, backed by 11 nations, was shot down by the Russian veto. China, along with India and the UAE, chose to not take sides and walked on the tightrope between the West and Russia.

Some analysts here may try to draw a parallel between the similar moves played by Indian and Chinese diplomats at the UN; however, they are way different in nature and reflect their different geopolitical positioning.

How China’s abstention could raise eyebrows in Moscow

China, falsely considered a staunch ally of Russia by the West, was supposed to stand strong with Russia in this time of crisis. Being a permanent member of the Security Council, China was expected not only to oppose this resolution but veto it altogether. This could have given a strong message to the world that two major powers share common views on the Ukraine question.

But much to Moscow’s chagrin, China chose to play on a safer side and abstained from the UNSC resolution. This is bound to raise eyebrows in Russia. Given Putin’s unambiguous support to China’s unwarranted claims on Taiwan, Russia had expected China to back it without mincing its words. So, by simply abstaining from voting on key UNSC resolutions, China has taken an anti-Russian line and diluted its support to Russia.

But make no mistake, this UNSC vote was no aberration. China has, for the past few weeks, constantly taken anti-Russia line on various fronts. Its companies have halted importing crude oil from the Russian Far East region. Chinese foreign ministry last week had openly supported Ukraine’s sovereignty and called on Russia to stop undermining stability in the region.

Even on Friday, after backstabbing Russia by its abstention, Chinese envoy Zhang Jun told the UN that “We believe that the sovereignty and territorial integrity of all states should be respected and that the purposes and principles of the UN Charter should be upheld.” This was truly an anti-Russia statement.

How India’s abstention came as a relief for Russia

On the flip side, India’s abstention from the UNSC resolution sent a totally different message. Firstly, India is a robust democratic nation, a member of the Quad security dialogue and a major US ally.

With such credentials, any analyst brand new to India-Russia relations is bound to expect India to toe the USA’s line and oppose Russia. So, when a nation like India abstains from the UNSC platform to refrain from criticizing Russia’s actions in Ukraine, it makes a big difference and serves as a setback for the Western nations.

India made no bones about the fact that Russia was in violation of international rules and the UN charter. It stated clearly that no solution can be achieved through killing people and jeopardizing diplomacy. India also called for an immediate cessation of violence and war in Ukraine. But when it came to voting on the resolution, India stayed silent. It opted not to take sides, which amounted to its silent diplomatic support to Russia.

In UN Security Council meeting on #Ukraine today, India abstained on the vote on draft resolution.

Our Explanation of Vote ⤵️ pic.twitter.com/w0yQf5h2wr

There are two different reasons why both India and China chose not to take sides. India’s step was quite bold given its sprawling ties with the west. India considers Russia a strategic partner, so it naturally prioritized Russia above Ukraine. But when it comes to China, the reason is purely economical. China needs the Western markets to revive its economy, and thus it deems it better to distance itself from Russia.