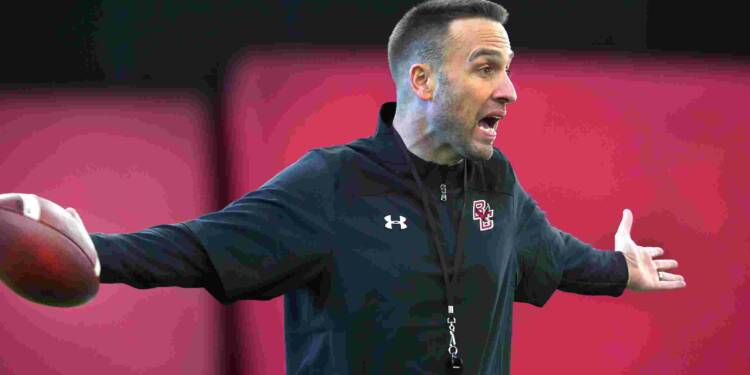 Jeff Hafley is the head football coach at Boston College in the United States. Jeff Hafley was born on April 4, 1979 in the New Jersey town of Montvale. In this article we are going to talk about biography, career, Net worth and family of Jeff Hafley so read the full article here.

Jeff Hafley has a verified twitter account on twitter and can be reached at @CoachJeffHafley. He has been followed by over 22k people and is very active on the platform.

Gina, Hafley’s true love, he met and married. The couple doesn’t say much about their relationship. They are Boston residents.

Hafley played wide receiver for the Siena Saints football team for four years (1997–2000) and earned a bachelor’s degree in history from Siena College in 2001. In 2003, he received a master’s degree from the State University of New York in Albany.

Jeff Hafley is paid a salary of $3 million each year. He trails other university head coaches like Brent Venables, Dabo Swinney, and Kirby Smart, to name a few. Hafley is not the lowest-paid coach in the league, since he makes more than Jim Grobe and others. Throughout his career, he has amassed a net worth estimated to be between $3 and $7 million.

When we talk about biography how can we forget about the journey or career of Jeff Hafley. He spent 11 years coaching at the collegiate level before joining the NFL, with stops at Worcester Polytechnic Institute (2001), Albany (2002–05), Pittsburgh (2006–10), and Rutgers (2006–10). (2011). The Scarlet Knights had the ninth-best passing defense in the country during his time at Rutgers, with Duron Harmon earning first-team All-Big East honors and Logan Ryan receiving second-team honors. Both Harmon and Ryan were picked by the New England Patriots and played for them.

Hafley first coached in the NFL with the Tampa Bay Buccaneers in 2012. He started with the Bucs as an assistant defensive backs coach and was promoted to secondary coach/safeties in 2013.

Hafley led a unit that helped Tampa Bay tie for third in the NFL with 21 interceptions in 2013. The Cleveland Browns hired Hafley to coach the secondary on January 27, 2014. Hafley would stay in this position for two seasons (2014–15) before being relieved of his responsibilities owing to a coaching change. Chip Kelly, the new head coach of the San Francisco 49ers, hired Hafley to coach the defensive backs on January 24, 2016. He was named as the co-defensive coordinator at Ohio State in 2019.

Hafley immediately established himself as one of the greatest recruiters in the country, with 247Sports.com ranking him ninth overall for the 2020 class. Following the firing of Steve Addazio, he was hired as the head coach of Boston College on December 13, 2019. We hope this biography article of Jeff Hafley will be helpful for you to understand the player’s journey and career.