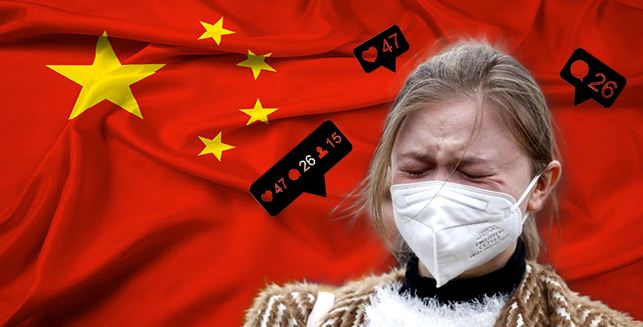 Ukraine is in the midst of a war. The country looks devastated. Thousands are dead, infrastructure has been destroyed and the Ukrainian economy is simply in its grave now. Ukrainians around the world are horrified to see what has become of their country. They are all angry, sad, and outraged. Their country has put its head into a war it cannot win. Ukrainians have a right to be disappointed. They also have a right to express their disappointment. Ukrainians deserve empathy in their hour of grief.

But for China, priorities tread a different path. Beijing is threatening the Ukrainians with incarceration if they do so much as open their mouths or put their thoughts down on social media. If they gather to protest in Chinese cities – oh boy, the world will come crashing down for them.

The CCP – true to its dictatorial tendencies, has decided that Ukrainians have no freedom of expression. So what if their country is on the verge of collapse? They must simply shut up.

CCP’s Order to Ukrainians – Shut Up or Perish

Ukrainians living in mainland China had voiced support for their country. After the Ukrainians condemned Russian aggression, the CCP’s militia-like police warned them against opening their mouths. The innocent Ukrainians – shocked by China’s apathy, sought help from the Ukrainian embassy in China.

As a result, the Ukrainian Consulate General in Shanghai stated that it has received many reports of China’s police interviewing Ukrainian citizens and warning them not to comment against Russia and its leadership. The Ukrainian embassy voiced concern over the attacks and demanded to stop the practice immediately.

The Chinese Communist Party has turned the Communist nation into a police state for Ukrainian nationals. About 100,000 Ukrainian citizens live in China, as estimated by the Ukrainian embassy, especially in the cities of Beijing, Shanghai, and Harbin.

Read more: China advises its stranded citizens to hide their nationality from the Ukrainian military

Ukrainians in China can no longer speak against Russia Because that would perhaps set a precedent for Chinese citizens to speak against the CCP as well, especially if China were to go ahead with an invasion of Taiwan soon.

The war in Ukraine has led to a humanitarian crisis across Europe. Hundreds of thousands, possibly even millions of Ukrainians have been rendered refugees. These refugees are now getting out of Ukraine. What do you think the response of an average Chinese man is to the plight of such refugees? Sympathy, pity, solidarity? Nope. Not happening.

Chinese men are dreaming of fornicating with Ukrainian women. Here are some of the comments which appeared on Chinese social media after the invasion of Ukraine was announced:

“I only care about the girls in Ukraine.”

“I am saddened by what Ukrainian citizens have to deal with. I propose that China should give entry to 10,000 Ukrainian refugees. Unmarried Ukrainian girls need to be protected from the misery of the war.”

“Ukraine being caught in a war means that many male soldiers will be killed and many women will be left behind. Looks like I’ll no longer be single soon.”

“I only care about whether pretty women from Ukraine can be safely imported into China.”

While the CCP’s forces are torturing innocent Ukrainians, Chinese men are drooling over the prospect of Ukrainian refugees making their way into the Communist nation and thus giving the world a sneak peek into the uncouth psyche that China espouses.