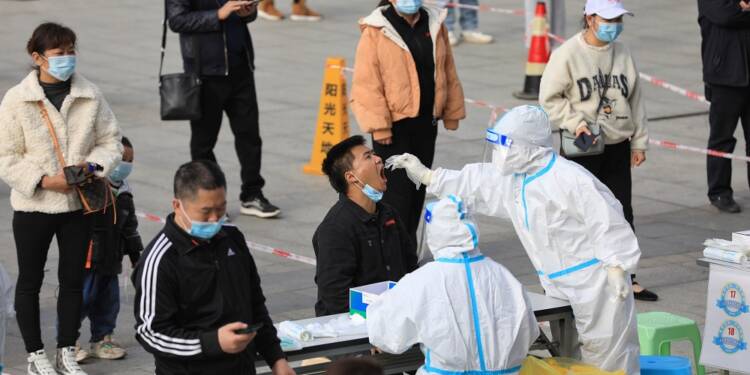 A medical worker in protective suit collects a swab from a man during a mass nucleic acid testing in Huichuan district following new cases of the coronavirus disease (COVID-19) in Zunyi, Guizhou province, China October 23, 2021. cnsphoto via REUTERS

China has managed to fool the world for two years now. But the reality is coming out, and it points to a gigantic scam effectuated by the Chinese Communist Party. Earlier, it was revealed that the Chinese regime has likely understated the Covid-19 death rate by as much as 17,000 percent in a systematic data suppression campaign aimed at sustaining its political image across the world. Now again, we are only able to see the shocking numbers of Covid deaths from Hong Kong, but take the above factor into consideration, and it will make sense that China has regained the top spot in the Covid death rate in the world.

As the highly transmissible omicron variety sparks many clusters across China, the country has seen its biggest daily tally of coronavirus infections since the Wuhan epidemic at the start of the pandemic. On Sunday, Hong Kong reported 31,008 Covid cases and 153 deaths. Officials suggested the reduction could be due to unreported quick testing results and the “weekend impact,” even though reported infection numbers were fewer than 40,000 for the second day in a row after climbing to more than 50,000 in the three days prior.

In Hong Kong, deaths from Covid-19 complications have been exceeding 100 per day for the previous four days, giving the city the world’s highest fatality rate for the coronavirus, which is largely among the city’s unvaccinated elderly residents. Authorities said they were allocating more resources to elderly patients, particularly those from care homes that had been decimated by infections, but experts argued the reforms were taking too long to take effect, and that more bleak data were on the way.

As of Thursday, the seven-day rolling average of Covid-19-related deaths per 1 million persons in Hong Kong was 17.8, according to the database Our World in Data. Latvia finished in second with a score of 10.71, and Georgia came in third with a score of 9.05. Based on this overall figure, Hong Kong’s rate was significantly higher than that of certain industrialised countries.

On Friday, the city had more than 50,000 Covid-19 cases for the third day in a row, confirming 52,523 new infections and bringing the total to 403,080. In the previous 24 hours, another 136 Covid-19 deaths have been reported, with patients ranging in age from 29 to 102. Seventy-three of those who died were residents of care facilities, and 97 of those who died were unvaccinated.

The fatalities over 24 hours do not include those who were previously uncounted due to a backlog, however, 1,086 deaths have been reported between February 25 and March 4, indicating the impact of the fifth wave on the populace.

The previous four Covid-19 waves had a total of 213 fatalities, or so the authorities would want you to believe. Officials also announced on Friday that outbreaks were affecting more than 72% of Hong Kong’s care homes, with 9,800 residents – or 13% of this population – and 2,850 staff affected. In Hong Kong, almost 75,000 elderly and disabled individuals live in residential facilities.

The situation is becoming grimmer by the day, and the zero-Covid policy of China is going bust. While the pandemic is wreaking havoc in the whole of China, the only somewhat credible window to understand the real numbers is Hing Kong. China continues to put millions of people under strict lockdown even today. Covid-19 is still ravaging large parts of the Chinese mainland. However, this seems not to be working and the COVID death rates are at an all-time high.