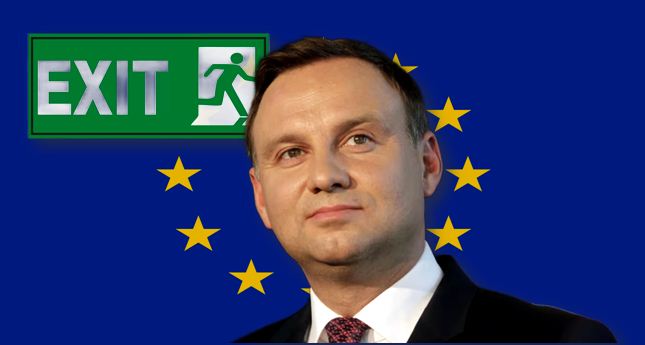 Poland became a member of the EU in 2004, but in the recent past and especially after the Brexit (Britain Exit), the demand for the exit of Poland from the European Union has picked pace paving way for the  POLEXIT (Poland Exit) movement to gain support in the country’s popular narrative.

The recent conflict between Ukraine and Russia has emboldened the POLEXIT movement, as the Polish people and government is confronting the ineffectiveness of alliances like the EU and NATO in taking any action against the Russian invasion of Ukraine.

NATO’s betrayal of Ukraine has also laid bare the fault lines in the military alliance. Poland is also a member of NATO since 1999. Poland has historically been a Bete noire of Russia as a disturbing past saw Russia time and again fighting for the control of Poland. The majority of Polish people and government officials consider Russia as the biggest existential threat to Poland but till now it was NATO that provided a security cover to Poland against the possibility of a Russian attack.

However, it seems now that Poland has started losing trust in the alliances like NATO and the EU. Also, the differences and fault lines between Poland, the EU, and NATO have started to appear in full glow.


Also Read: Everything has changed for Poland in a matter of a week

The clash of EU and Polish laws

In 2021, a Polish court provided a major challenge to the EU’s legal framework, effectively rejecting the primacy of EU law over Polish national legislation in certain matters. Many have described this as a move that could lead towards a “legal POLEXIT”, as it introduces deep issues in cooperation between the Polish and European courts.

Also, last year, Poland’s Constitutional Tribunal ruled that some articles of the European Union’s primary treaties were not compatible with the Polish Law. Essentially, it declared that EU laws should not have primacy over any Polish national legislation.

This legal challenge to the European bloc was brought by the Poland prime minister himself in March last year. This represents a one-of-a-kind situation, as it is the first time since the formation of the EU that a leader of a member state has questioned its treaties openly in a constitutional court. The ruling also says that Polish Judges should not use any EU law to question their peers.

On Tuesday, the US rejected Poland’s offer to send MiG-29 fighter jets to Ukraine via a US airbase, saying that it was “not tenable” as the proposal raised “serious concerns” for the entire NATO alliance. It was in response to a proposal by the Polish government which stated that “Poland is ready to deliver its Mig-29 fighter jets to Ukraine – for free and without any delay – through Ramstein airbase (US airbase in Germany)”.

In his statement, Zbigniew Rau, Poland’s foreign minister, had said that his government was “ready to deploy – immediately and free of charge – all their MiG-29 jets to the Ramstein airbase and place them at the disposal of the government of the United States of America”. According to him, after Poland transfers these jets to the US airbase, the US can then transfer them to the Ukrainian air force so that it can be used to strengthen Ukraine’s aerial fight against Russia.

Ukraine also flies the MiG-29 and has suffered heavy losses since the Russian offensive last month. Top Ukrainian officials since then have been soliciting other countries that operate the jet to transfer their MiG-29s, since it would mean minimal training for Ukrainian pilots.

Read More: EU could descend into a civil war after the Ukraine crisis is over

The United States’ rejection of Poland’s fighter jet transfer proposal and the recent clash of Polish and EU laws are some of the important fault lines that look to upend the relation of Poland, the EU, and NATO. Also, though NATO claims to be a strong force to counter the Russian aggression, its recent failures may push Poland and other alliances away from the EU for long.

All of this is bound to benefit the POLEXIT supporters in Poland and make their demands seem more legitimate. The anti-EU voices in Poland will exert influence and may result in Poland pressing the POLEXIT button whenever the next referendum happens.