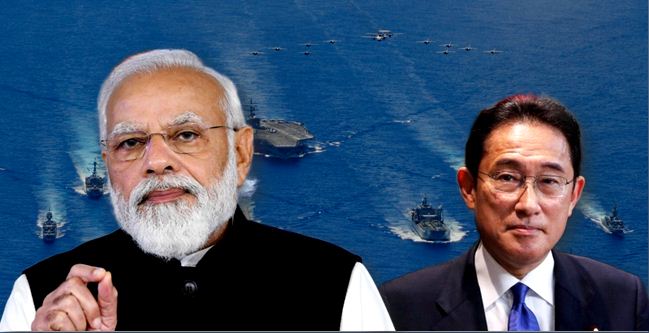 The Quad alliance between India, the United States, Japan and Australia is going through a tough phase. Differences have erupted between members, more precisely, between India on one side, and Japan, U.S. and Australia on the other. India is not interested in turning the Quad into a forum for anti-Russia activism. It wants the security grouping to solely focus on the Indo Pacific, and take systemic steps to contain China. The other countries, however, do not seem to agree with this approach. This has caused a rather open rift in the alliance.

Now, Japanese Prime Minister Fumio Kishida, who in recent times has shown himself to be an absolute China dove, is travelling to India on Saturday. On the agenda is the rift between Quad member nations. According to a report by The Hindu, during the visit, Fumio Kishida is expected to try to narrow the gap between both sides, and particularly between India and other Quad partners over the issue.

Earlier this month, during a sudden Quad meeting of heads of states, Joe Biden and Fumio Kishida fumed at Russia and called on India to join the chorus against Moscow. Australia has also more or less sided with the West and has even gone on to join the sanctions bandwagon against Russia. It is only India that both Washington and Tokyo wanted to win over.

Prime Minister Narendra Modi stayed silent, did not condemn Russia and was a signatory to the joint statement issued after the meeting. In the joint statement, no reference to Russia was made, although it did speak about the “ongoing conflict and humanitarian crisis in Ukraine and assessed its broader implications” in the same breath as it underlined the “continuing pursuit of a free and open Indo-Pacific”.

What to Expect from the Modi-Kishida Meet?

India has made it clear – it will not join the West in pursuing a vigilante campaign against Russia. Moscow is an age-old friend of India, which has stood by New Delhi when nobody else did. Yet, the Biden administration and its allies are incessantly poking India to condemn Russia.

During his visit to India, the Japanese Prime Minister will most likely be reminded about the grave threats that China poses to a free and open Indo Pacific. Additionally, China is the biggest threat to Japan. Given how the Senkaku islands dispute could flare up at any time, apart from Beijing making a move for Taiwan – Fumio Kishida would be told that Japan’s best interests will be served if it focuses on China instead of demonising Russia.

It has been a primary objective of Joe Biden to dilute the Quad. The Russian invasion of Ukraine gave him the perfect opportunity to do so. Fumio Kishida, for reasons best known to him, jumped right in to play the role of the most anti-Russia leader around. It achieved him nothing and as a matter of fact, Russia’s invasion of Ukraine is continuing with heightened ferocity.

But it did prove to be counterproductive. Now, China has been left off the hook. China is seeing how the Quad is being turned into an anti-Russia grouping, and how only India is resisting such moves. The others, frankly, seem to have forgotten just how big a threat China is to the Indo Pacific.

Kishida is about to be schooled in New Delhi on how the Quad is being diluted, and how Japan is being an active participant in the dilution. Japan needs to focus on China, and Prime Minister Modi will be reminding Kishida about the urgency with which Beijing needs to be countered.

Pierre Poilievre: The only leader who can save Canada’s faltering conservatives