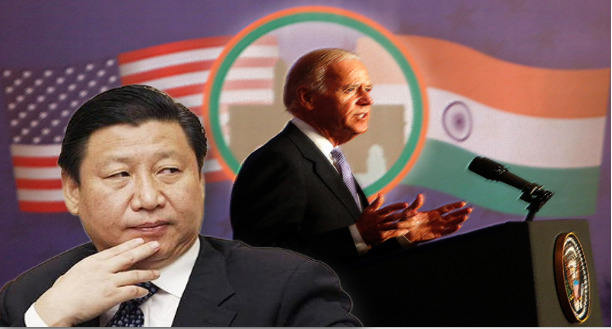 Biden has committed the biggest policy blunder in his entire tenure to date. He has tried to cancel India’s role in the Indo-Pacific. And this has immediately led to China ramping up its military mobilization in the South China Sea region. So as the developments go, Biden is therefore on the verge of giving away the Indo-Pacific to China.

While talking about Russian aggression against Ukraine, Biden seemed to equate NATO with Quad.

Conflating NATO (a military alliance) and the Quad (a diplomatic initiative), Biden, despite reading from a script, went on to mention in the same breath India (a US strategic partner but not an ally) and two countries under the US security and nuclear umbrella—Australia & Japan. pic.twitter.com/453yD1n5r1

The US President said, “The Quad is, with the possible exception of India being somewhat shaky on some of this, but Japan has been extremely strong — so has Australia — in terms of dealing with Putin’s aggression.”

In the same statement, Biden said, “We presented a united front throughout NATO and in the Pacific.”

Now, these are rather significant remarks coming from the US President himself. Firstly, he called India “shaky” and secondly, he used the term ‘Pacific’ instead of using ‘Indo-Pacific’.

Biden’s statement and choice of words suggest that he wants to undermine India’s role in the region. This is a major departure from the Trump-era policy of affording India a key role in the Indo-Pacific in line with the country’s geographical position as a gateway into the Indo-Pacific.

It also suggests that Biden is ready to let China feel more secure, emboldened, and fearless. But by side-tracking India for not doing Biden’s bidding in the ongoing Russia-Ukraine war, The US president is giving China significant leverage in the region.

India isn’t supposed to toe Biden’s line. Unlike Australia and Japan, India isn’t a formal US ally. New Delhi and Washington, D.C. are strategic partners with a lot in common. However, it doesn’t mean that India has to twist its policy as per the whims and fancies of the Oval Office.

Yet, Biden insists on being rather transactional and wants India to twist its foreign policy as per Washington’s global interests. This is leading to some sort of friction between the two sides.

For China, Biden’s condescending remarks against India have come as a strong hint. Beijing has realized that Biden is deeply obsessed with Ukraine and he is ready to embolden China, for the sake of appearing tough on Russia.

Therefore, China has reportedly militarised at least three of several artificial islands that the Communist country has built in the South China Sea.

China is said to have armed these islands with anti-ship and anti-aircraft missile systems, laser and jamming equipment, and fighter aircraft. It is therefore threatening all countries that claim strategic waterways in the South China Sea.

Chinese militarization of islands in the region is manifestly illegal. The Communist country has been building such islands since the days of the Obama Presidency in 2014. China makes such artificial islands on top of rocks or reefs which are close to the water surface at high tide.

Through such islands, China has carved out territory spanning thousands of acres in the hotly contested South China Sea region. The Philippines, Malaysia, Vietnam, Brunei, and Taiwan, all have certain claims to make in the South China Sea.

Read more: China won the South China Sea without firing a single bullet. It tried the same trick with India. A blunder

Beijing however claims the entire region and has been trying to use the disputed islands constructed over the past few years to consolidate its claim and control in the region.

However, Beijing seems to be least bothered by what the world at large has to say. Now, Biden’s remarks are only emboldening China further. The Communist country has been given a free pass and it is using it to militarise its artificial islands and assert control over the entire South China Sea.