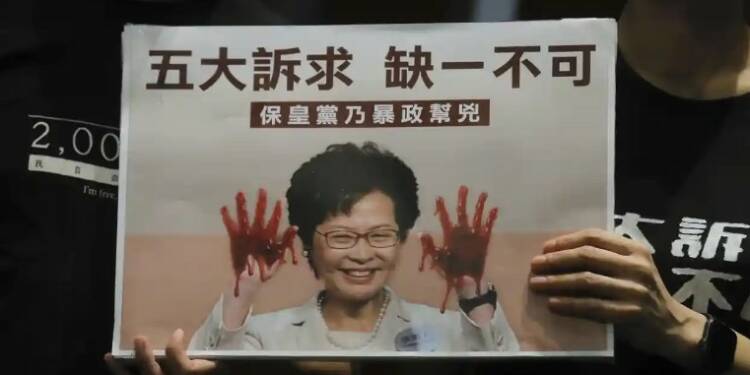 Hong Kong’s leader Carrie Lam has provoked yet another debate by promising a gradual easing of the city’s rigorous anti-pandemic measures. Carrie Lam Cheng Yuet-ngor, the chief executive, has decided to allow direct flights from nine nations to resume, but she has put on hold a proposal to test the entire population for Covid-19. The Compulsory Universal Test (CUT) is seen as critical by mainland China in resuming vital, quarantine-free travel between Hong Kong and the rest of the country.

The world will not be surprised to see Hong Kong suffer the same fate as that of mass detentions, hard regulations, violation of personal and religious freedom, and demographic changes that are completely transforming the city into the mirror image of mainland China. CCP’s plan to completely take over the city and loot its wealth is behind the fear instilled among the citizens. And it has been a successful endeavour for quite many reasons. One of them is the consistent support CCP has gotten from the Carrie Lam administration.

Be it the human rights abuses that the pro-independence activists have to suffer in Hong Kong, or now, the worry of ever-increasing Covid cases and deaths; Carrie Lam has consistently created an environment that has led to the deaths of many Hong Kongers. Not only this, but she has even promoted the use of fake Chinese vaccines at the expense of Hong Kong’s health security.

The flawed policies of Carrie Lam

Many are wondering if the latest round of declarations from the government means Hong Kong is abandoning the mainland’s official “dynamic-zero infection” plan in favour of Western countries’ “living with the virus” approach. Many locals have also expressed dissatisfaction with official sources reported in media stories who insisted on a late-March or early-April testing timeframe, causing panic buying by residents fearful of a citywide lockdown.

Carrie Lam, Covid-19’s chief executive, said she was “extremely sorry” for the 7,000+ deaths, but she did not reply to concerns about who should take the responsibility or whether fatalities might have been avoided if better policies were in place. Lam praised mainland medical guidance, saying that the elderly are now the centre of attention.

Chief Exec. Carrie Lam said she was "very saddened" by the 7,000+ Covid-19 deaths but did not respond to questions about who should bear responsibility, and if fatalities were avoidable.

Lam hailed mainland medical advice and said the the elderly are now the focus of treatment. pic.twitter.com/QV7tBA8Jzu

When Liang Wannian, China’s top Covid strategy expert, visited Hong Kong in early March, the city was engulfed by the highly transmissible Omicron variant. Beijing’s subtle steering of the Lam administration’s efforts on the “zero-dynamic” front while pushing for social unity was perhaps best illustrated. Liang rapidly refocused local authorities on “saving lives,” as well as minimising severe cases and lowering infections, but acknowledged that Hong Kong lacked the capacity and had missed the optimal opportunity for citywide testing.

The previous four Covid-19 waves had a total of 213 fatalities, or so the authorities would want you to believe. Officials also announced on Friday that outbreaks were affecting more than 72% of Hong Kong’s care homes, with 9,800 residents – or 13% of this population – and 2,850 staff affected. In Hong Kong, almost 75,000 elderly and disabled individuals live in residential facilities.

Read more: Its official, China has the highest COVID death rate in the world

The situation is becoming grimmer day by day, and the zero-Covid policy of China is going bust. While the pandemic is wreaking havoc in the whole of China, the only somewhat credible window to understand the actual gravity of the situation seems to be Hong Kong. China continues to put millions of people under strict lockdown even today. Covid-19 is still ravaging large parts of the Chinese mainland. However, this seems not to be working and the COVID death rates are at an all-time high.

Hong Kong came up as a pandemic success story at the start of 2022, proving that the so-called Zero covid policy, whatever the cost, could reduce the virus’s medical toll. Infected people accounted for less than 1% of the population, and the city had recorded roughly 200 Covid deaths out of a population of nearly 7.5 million.

Then came Omicron and B.A.2, its more contagious sibling. More than three million people are likely to have been infected since then, and Hong Kong now boasts one of the world’s highest covid-19 death rates. The pictures are both heartbreaking and familiar: triage tents outside hospitals; packed crematoriums and overflowing morgues; healthcare system on the verge of collapse. All this could have been managed without many deaths, only if she would have acted as a leader and bought more effective vaccines rather than the Chinese ones. But for Carrie Lam, the butcher of Hong Kong, bootlicking her masters sitting in Beijing has always been the topmost priority.