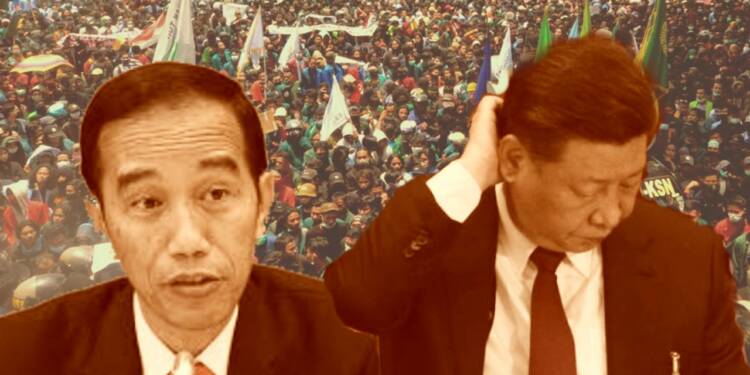 Beijing continues to face challenges in its efforts to improve its image throughout Southeast Asia. According to a recent Bloomberg report, only one in every three Indonesians supports Chinese investments in the country.

The governments of Indonesia and China have signed a number of investment agreements. The Chinese also want to strengthen their ties with Indonesia in order to gain access to its resources and strengthen its economy. But, the people of Indonesia are not ready to accept China as an ally and look askance upon its involvement in their country’s economy.

Also Read: A secret military coup is underway in Indonesia

Why do Indonesians reject Chinese Money?

China is well-known for its investments in smaller countries. It has investments in a number of Asian countries, including Mongolia, Sri Lanka, Pakistan, and Tajikistan. But, thanks to Chinese investments, all these nations are facing crippling economic woes today.

Chinese investments come with invisible strings attached. This has been their approach for a long time. Today nations like Sri Lanka and Pakistan have almost gone bankrupt due to their over-reliance on Chinese money. They even strip nations of their sovereignty and self-dependence as we have already seen in Sri Lanka. In various African nations, diplomats often get diktats from their Chinese counterparts on issues related to global geopolitics and healthcare.

Furthermore, China’s economy is declining. If rising debt and vaporising investments in the communist country weren’t enough, the Covid-19 outbreak has left the Chinese economy battered. For example, Evergrande, a major infrastructure brand, is piled under heavy debt. The declining GDP growth rate is also a worry for China. As per World Bank, China’s economy is only expected to grow by 5 per cent this year, down from a previous estimate of 5.4 per cent. But the growth rate could even go down to 4 per cent. All this data makes Indonesians more skeptical of Chinese investments. They fear that the heat of the burning Chinese economy could also reach their doorstep if the economic engagement between the two nations is intensified.

Indonesians have a history of rejecting China. For a long time, Indonesians have harboured anti-Chinese sentiment. They have criticized the wave of Chinese migrants. This anti-China sentiment is also associated with the discrimination of the Uyghur Muslims in China. Unlike Indonesian President Joko Widodo, Indonesians continue to raise their voice against China over the matter.

Companies with excessive Chinese funding are getting heavily scrutinized in nations like India. You must have heard of the mobile game “Free Fire”. The game was created by Singaporean company Sea Group. India banned the game in February 2022, because it had significant Chinese investments. The company is listed on New York Stock exchange. But it was banned because a large chunk of the stakes in the company is held by Chinese investors leading to a loss of $16 billion to the company in a single day.

Also Read: India made a Singaporean company bleed $16 billion in a day because it had a Chinese connection

And this is what Indonesians fear, that the Chinese investments will do more harm than good to their country. Sri Lanka and Pakistan are just two examples of upto what extent China’s easy money can harm a nation. So, it’s time for the Indonesian government to acknowledge the China threat and start clamping down on Chinese involvement in the Indonesian economy.