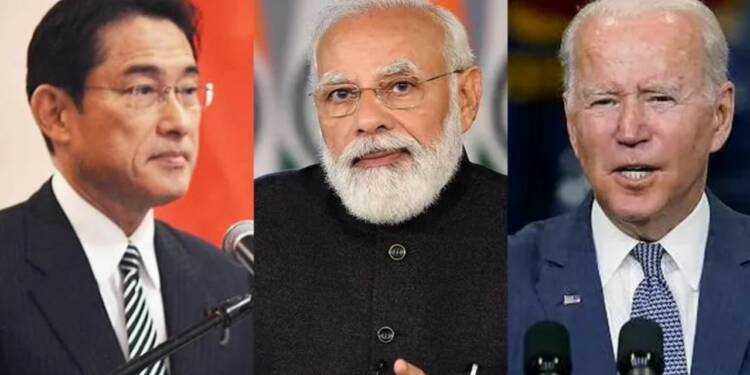 The foreign ministers of Japan, South Korea, Australia, and New Zealand will meet with their NATO counterparts. The meeting’s agenda is to seek each other’s help in furthering Russia’s economic and diplomatic isolation, as a result of its war on Ukraine.

But two unusual things are worth paying attention to –

Both of these moves are intended to diminish India’s authority in the ‘Indo-Pacific’ area. Let me explain.

US President Joe Biden is the brains behind these measures. Biden is clearly infuriated with India’s soft stance towards Russia amidst the Russia-Ukraine conflict.  He is therefore using all the possible means to restrict India’s authority in the region.

Furthermore, the Japanese PM Fumio Kishida is being used as a pawn in this drama, produced and directed exclusively by Biden. Kishida did the exact opposite of his predecessor’s stand on India’s role in the Indo-Pacific region.

Japan and India have shared cordial ties under former Japanese PM Shinzo Abe’s regime. Abe acknowledged India’s relevance in the region’s security and raised the idea of QUAD formation amidst China’s rise in the region.

Kishida has appeared to favour the NATO alliance of western powers, diminishing the QUAD’s importance in the area. His recent gestures depict how he is being played like a fiddle by Biden.

For instance, US-led NATO’s chief during a meeting with the Japanese Prime Minister referred to Indo-Pacific as the “Asia- Pacific”.  This reiterates the notion that Biden wants to undermine India’s role in the region.  And PM Kishida is, unfortunately, facilitating Biden in the accomplishment of this task.

However, a weak Kishida fails to recognize, that the focus should rather be on developing QUAD under India’s leadership in order to oppose Chinese expansionism in the area.

In fact, even the Former Japanese PM Yoshihide Suga had reiterated the fact that ‘QUAD with India’ is in Japan’s national interests and for maintaining the stability and security of the Indo-Pacific region. Suga said that the QUAD would lose its relevance in the Indo-pacific region without India’s inclusion in it.

SAY NO TO NATO

Kishida must realise that NATO is essentially an anti-Russian organisation. It has little to do with the region’s response to China. QUAD, on the other hand, provides a venue for members to discuss their common problems in the region and to exert united pressure on China. As a matter of fact, even France opposes NATO’s involvement in the Indo-Pacific.

In a bid to put an end to Kishida’s aspirations to escort NATO into the region, Abe needs to get Kishida back on the right track. Abe might use his power to pull Kishida’s string because he still has major control over the Liberal Democratic Party. It must be clearly realised that if India’s position in QUAD is diminished, containing China will become a faraway dream.

JK Meaning with Explanation and Definition