‘China can survive this economic Armageddon only if it abolishes Xi’s policies,’ Chinese premier declares 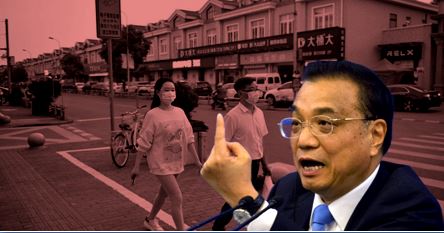 The Chinese economy is reeling under a massive wave of the COVID-19 pandemic. Strict lockdowns have been introduced in tens of cities to curb the spread, which is taking a heavy toll upon the Chinese economy.

Bloomberg reported that around 373 million Chinese citizens living in 45 cities are now under full or partial lockdown. The cities under lockdown make up around 40% of China’s Gross Domestic Product (GDP). Moreover, lockdowns of lesser intensity have also been introduced in other cities as well, thus affecting 70% of China’s GDP in total.

Gavekal's bottom-up analysis of China’s top 100 cities by GDP finds that all but 13 have imposed some form of quarantine restriction, and the intensity is increasing. We classified these cities from no restrictions (level 0) to full lockdown (level 4). pic.twitter.com/weTntE5CPp

Prolonged lockdowns would mean that China’s economic growth is all set to go downhill this year and the nation can very well register negative economic growth as a result. And that’s why the Chinese Premier, the number 2 leader in the Communist Party of China, has now set the alarm bells ringing over the deteriorating situation of the Chinese economy.

Within a week, Chinese Premier Li Keqiang issued a third warning about the economic risks that China faces today. He also signaled an urgent need to change the current policies that the Xi Jinping regime has devised to tackle the COVID challenge by saying that “China will study and adopt stronger economic policies as needed to support the economy.”

Li Keqiang has been warning of grave economic consequences that China is destined to face after imposing draconian measures to rein in the spread of the pandemic. Economists have suggested that the Chinese economy may face a contraction in the second quarter if the lockdowns are not lifted anytime soon. Li has suggested some changes to the Xi regime’s economic policies if such a grave economic crisis is to be averted.

Li said Monday that pro-growth measures should be brought forward and accelerated, including tax and fee cuts, sales and usage of special bonds, and incentives to keep jobs. He also warned the government and several provinces against introducing policies unfavorable to market expectations.

All in all, Li’s warnings particularly stress the need for opening up the economy as soon as possible. But the Xi regime’s ‘Zero Covid Strategy’ is what is obstructing Li’s way. Li wants softer Covid regulations and restrictions to let the industries heave a sigh of relief. But the Chinese administration is hell-bent on pursuing its long-failed Zero Covid scheme to save its face. Revising its Covid strategy or rolling it back altogether would imply that China has been knocking on the wrong door from day one to tackle this pandemic.

‘Zero Covid Strategy’ has been the face of China’s anti-Covid efforts for the last two years. Li now wants this strategy abolished to save the Chinese economy; however, the Xi regime is scrambling to save Jinping’s political career first. For the Xi gang, Zero Covid Policy has to be successful, by hook or by crook, to preserve the incumbent president’s dignity. It has to show desired results at least on paper, if not on the ground. That’s why China has not reported even a single death so far despite the pandemic ravaging extreme corners of China quite ruthlessly.

Li wants Xi and his policies to go