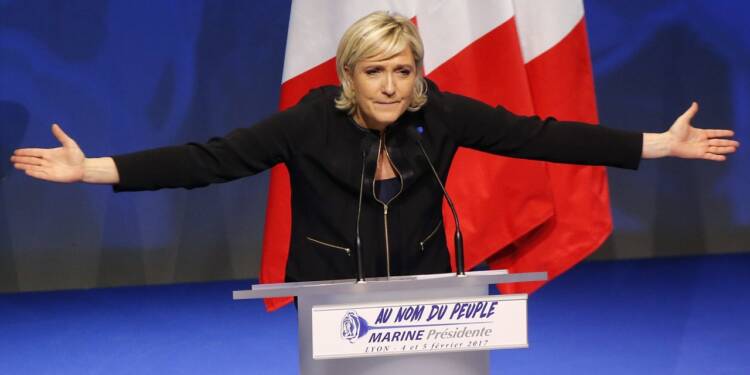 Far-right leader presidential candidate Marine Le Pen gestures as she speaks during a conference in Lyon, France, Sunday, Feb. 5, 2017. Britain's decision to leave the European Union and the election of U.S. President Donald Trump have given the French a "reason to vote" because it can result in real change, the top lieutenant of far-right French presidential candidate Marine Le Pen declared Sunday ahead of her long-awaited speech. (AP Photo/Michel Euler)

The second round of French elections is due on the 24th of April. Though Emmanuel Macron is leading, the far-right Presidential candidate Marine Le Pen has received a greater share of the vote amongst the younger lot.

According to an Ipsos poll, Le Pen received a greater share of the vote from the 18-24 age group. Experts say that the younger lot’s massive support for Le Pen reflects a rejection of the current government’s socio-political policies and their turn to conservatism.

It looks like the right-wing parties in France are making sure the ‘ Liberal American Culture’ is shown a way out. Le Pen and another right-wing French presidential candidate Éric Zemmour have repeatedly highlighted ‘Wokeism’ as a potential threat to French culture.

Wokeism apparently has long been a problem for the French people. But it’s only now, that Le Pen and other far-right candidates have made Wokeism a significant issue in the country and ensured that the issue gets shredded to pieces in near future.

Wokeism – a threat to the French culture


In France, the word “Wokeism” is perceived as a Leftist-Liberal-Islamist nexus.

Its troubled history with Islamist Blasphemy, the attacks on Charlie Hebdo, and the beheading of Samuel Paty, a history teacher, among other events, has forced France to recognize that there is indeed a problem that needs to be addressed.

Marine Le Pen through her anti-woke movement in France stressed that the US is introducing a cultural virus into France via universities, pressure groups, and social media, posing an existential threat to French culture.

Le Pen’s hardline far-right ideology agendas like the “great replacement theory,” in which she claims that “elites” are trying to replace the French population with non-Europeans, and her refusal to coexist with Islam, have made her a more appealing candidate.

Ending “uncontrolled immigration” through a referendum is first on Le Pen’s agenda and this all makes her an important estate in the fight against ‘Wokisme’ (French for wokeism).

Read More : ‘No prayers in universities, No Hijab and No Burkini!’ France goes on a banning spree to fight Islamism

Read also : Le Pen should be an ally to Macron’s anti-radical Islam push, not a critic of it

No other mainstream party in France rather than Le Pen’s has made wokeism one of the central agendas of its presidential campaign.

But here’s where it gets intruiging. Le Pen’s crusade against Wokeism has led even other political parties to start bashing wokeism openly.

Anne Hidalgo of the Parti Socialiste and Sandrine Rousseau of the Europe Écologie Les Verts party, both spoke against being labelled as “woke” candidates.

Marine Le Pen will ensure that the wokeism in French is used in conjunction with other scary expressions until the end of the campaign, starting an effective end to American Wokeism in the country. This could be the start of a new revolution.