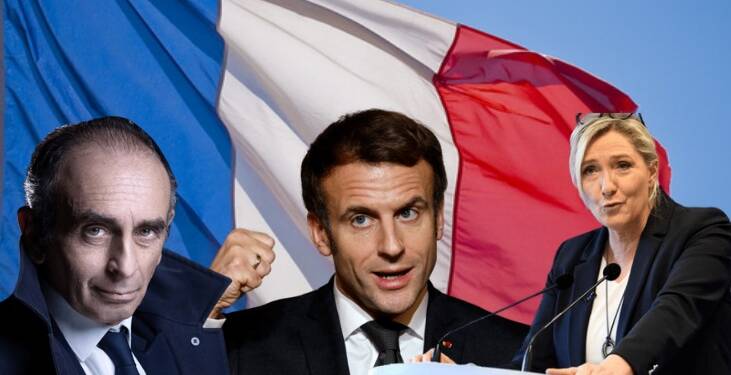 Throughout 2020 and 2021, French President Emmanuel Macron was in the spotlight. The man who had started his tenure as the French President as a centre-left leader suddenly started cracking down on radicalism and tightening asylum norms in France. The global left-leaning media was of course outraged by Macron, who challenged the left-liberal ‘open door’ policy.

Read more: France is not just talking. It is also identifying and eliminating Islamist terrorists

And then the left-liberal media realised that Macron is not even as tough on radicalism and his political competitor, Marie Le Pen is one step ahead of him. The firebrand leader kicked off her presidential campaign with a promise to restore law and order to what she called France’s “narco-housing estates” and “Talibanised” zones.

While global media criticises Macron for discarding the so-called liberal principles, Le Pen condemns his administration for lack of nationalism. She said, “We know now who Emmanuel Macron is and what he stands for.” Le Pen actually claimed, “It seems to me that the French want this choice between him and me. It’s really a choice between globalism and nationalism.”

The standards of nationalism are evidently high in France.

Read more: Come Macron or Le Pen, France is getting rid of rabid Islamists in any case

French politics was becoming more of a Macron v Marie Le Pen contest. But the entry of Éric Zemmour is a new twist that effectively makes the country a paradise for right-wingers. He is unapologetically right-wing and goes one step ahead of Marie Le Pen in advocating French nationalism.

In an interview, Zemmour said that the “right of asylum is for the freedom fighters like Victor Hugo and Solzhenitsyn.” He also said that he will not go beyond freedom fighters in considering asylum cases. He even took the example of Japan, a country with a closed culture that takes very few asylum seekers.

And Zemmour was quite clear about the fact that that around 300 asylum-seekers that France used to take in the 1950s is good enough for him.

On the question of Afghan women facing atrocities at the hands of the Taliban, he was quite clear about one thing- “I am not the Santa Claus of humankind.” He reasoned that He reasoned that different people have their own histories and their own cultures and that he is “neither here to give moral lessons to 7 billion people, nor to welcome all the misery and all the misfortunes of the world.”

"I am not the Santa Claus of humankind" pic.twitter.com/4t5MUAPGT7

Why is France turning ultra-conservative?

The changing ideological orientation of France is actually a corollary of the recent incidents in the country. The Charlie Hebdo attacks and the beheading of Samuel Paty, a history teacher, for showing the Charlie Hebdo cartoons as an example of freedom of speech had a huge impact on the French psyche.

Regardless of Angela Merkel’s ‘open door’ policy and appeasement politics of other European leaders, Macron realised that radicalism is a threat to French society, French democracy and French liberty. He wasn’t afraid of saying this in so many words and he even acted against radicalism without caring much for the negative reactions against him.

In fact, Macron did not only condemn radicalism but also acted against it. His administration made it clear that he rejects radicalism and that radicals will have to either exit France or mend their ways. He even banned radical groups in a bid to protect French freedoms and liberty.

Macron’s actions are no doubt courageous. But Le Pen and Zemmour are taking it further. They don’t just want to contain radicalism with administrative witch-hunts, but they also espouse a France First kind of policy by speaking up against liberal asylum policies of the country.

Like other European countries, France admits thousands of asylum-seekers every year from conflict-torn countries around the world. Europe tries to play the role of a global guardian and ends up damaging its own social fabric. But French conservatism is showing the way forward and the entire European Continent must adopt it if it wants to combat radicalism.