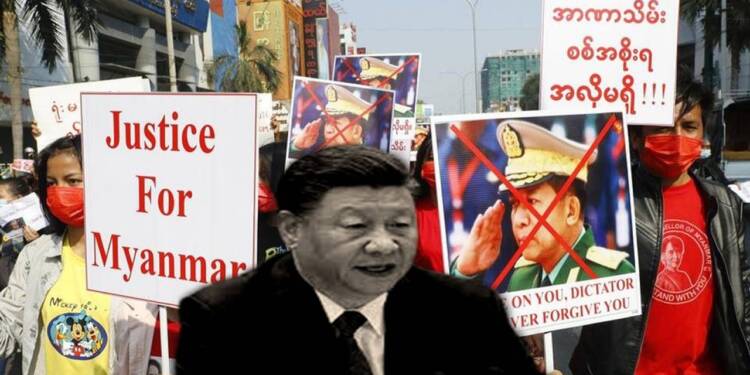 When it came to Myanmar, Beijing always treaded a tight line of diplomacy with an open cooperation formula that neither legitimized the junta regime nor endorsed the democratic opposition. But tides are slowly taking sides following the three-month-long war in Eastern Europe. Beijing has discerned it’s time to leave all pretensions and enhance its clout over the Indo-Pacific region. In the light of the Russia-Ukraine war, China is fast forward with its move to legitimize the irascible Junta regime of Myanmar.

Read more: Have Japan and India already declared war on China in Myanmar?

China’s take on the military coup on February 1, 2021, by the Junta was plain and more like what China often does. Beijing described the putsch as a ‘cabinet reshuffle’ and it never evoked surprise since it would be daft to stretch one’s imagination thinking China condemning something the world considers ruthless and vile. But fast forward to March saw unrest of kind within the decision-makers in Beijing as there were attacks reported on Chinese factories and businesses across Yangon. Beijing thus called for prudence by opening doors of relationships with the National League for Democracy Party (NLD) of Myanmar in a bid to picture Beijing’s friendship as open to all people of Myanmar.

Even bolstering ties across all sections, China had the smarts to view the opposition in Myanmar as being a deterrent to Beijing’s business interests as they would lean on China only to achieve their petty political points. The next road for China was to implore Cambodia which heads the ASEAN to coax the Myanmar Junta regime to fall in line with ASEAN’s five-point road map. The ploy was to establish a military proxy party in Yangon that will upend the conflict and would invariably boost the Chinese investments in Yangon.

China’s fresh reversal in its policy decisions is no vague strategy. By the end of February, the crisis in Eastern Europe started taking shape with Russia cruising past the key cities of Ukraine. With Russia braving a fight against some of the world’s dominant forces allied with Ukraine, a captivated China saw the opportune moment to muzzle through the inner doors of Myanmar that were always held under Russia’s orbit of influence.

Read more: Cambodia and Japan come up with a plan to desinicize Myanmar

China’s run to fill in the void left by Russia sits entirely on strategic interest. The web of involvements such as keeping a blind eye to the military atrocities against civilians was poised to boost China’s leverage over the Indo-Pacific for being in the good books of the junta regime. But China’s game of gaining influence at the opponent’s cost may alter course in due time, or it may have already taken place.

Beijing’s coercing tactics to place Cambodia push Myanmar to follow the ASEAN line have hit a roadblock. In a recent tour to outweigh the Chinese influence in the indo-pacific, Japan had made cohesive attempts to rope Cambodia to counter a belligerent China. The move sparked outrage down in Beijing as Cambodia once a china dove showed signs of drifting away from Beijing’s arms of influence. Chinese latest ruse at Cambodia has echoed concern within the latter’s ASEAN counterparts. Countries including Indonesia, Singapore, and Malaysia have given their word to the current Chinese move to cement the junta regime in Myanmar. The Chinese effort did nothing to change ASEAN countries from backing off its support to the opposition in Yangon.

The tentative attempts to shower support on the Junta regime have seemingly punctured every ounce of Chinese influence within the ASEAN block. The road to recovery in Yangon will cost a greater price for China as the priorities within the ASEAN hangs in balance and are showing no signs of tilting toward China anytime soon.