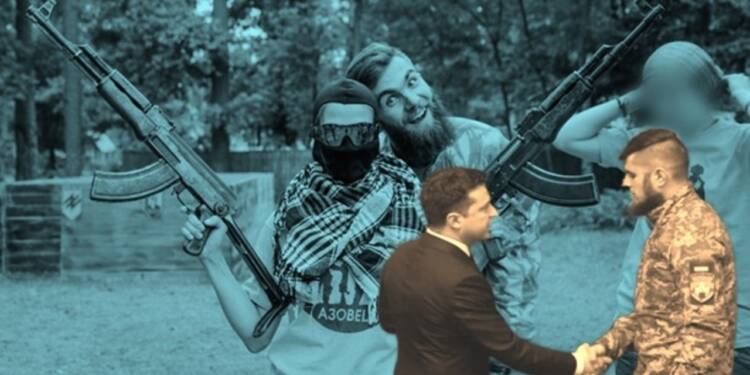 “I want that this war will end and we will kill all the Russians.”

These are the words that the Azov Battalion has been teaching Ukrainian children for years now. Do you what happens in the Sub-Sharan region of Africa? First of all, do you know what Sub-Saharan Africa is? It basically consists of all of Africa south of the Saharan Desert. An important facet of this region is that children can often be seen wielding guns, fighting battles and jumping around like armed monkeys. But that is Africa. The world is, unfortunately, used to seeing African kids becoming soldiers before they become adolescents.

What the world does not know is the fact that Ukraine’s Azov Battalion does the same with children as young as six. Ever since Russia annexed Crimea in 2014, Ukraine has been accused of grave human rights abuses in Eastern Ukraine or Donbas, as it is currently being called. This region consists of a majority of ethnic Russian speakers.

Ukraine’s Azov Battalion, which is a neo-Nazi fighting force, is most active in this region. Azov Battalion, since 2014, has been in the news for organising “summer training camps” across Ukraine. What is the ‘unique selling proposition’ of such camps, you might ask?

Well, they are used to train children to fight Russia.

Azov Battalion and its Child Victims

According to a 2015 article by the Kyiv Post, children are trained by Azov fighters in a range of activities, like stripping down and assembling AK-47 assault rifles, target practice (with air guns), tackling assault courses, and practising combat poses and patrolling. At such camps, Azov Battalion’s flag is lowered every day as children and Azov fighters together sing the chorus, “Death to the Russians.”

Guess who has been funding the Azov Battalion?

For years now, the Azov Battalion has served as Ukraine’s most formidable weapon against Russia. It has a sophisticated force and is also in possession of lethal weapons. Where do you think it got the money for all such luxuries from? How is it that the Azov Battalion became such a big threat to Russia that Vladimir Putin had to openly declare that his war was meant to “denazify” Ukraine?

Important to note is the fact that the Azov Battalion – which “officially” displays the Nazi SS emblem, is described by the Kiev regime as “a volunteer battalion of territorial defence”. It is a National Guard battalion under the jurisdiction of the Ministry of Internal Affairs.

You would be surprised to hear that the Azov Battalion is supported by the United States. The U.S. has over the past several years provided military aid to Ukraine to strengthen the country’s ‘National Guard’. The Azov Battalion is a part of Ukraine’s National Guard, which effectively means that the United States has been funding and arming this neo-Nazi group that is accused of employing and training children to wage a war against Russia.

The Azov Battalion has been indoctrinating children and creating soldiers out of unsuspecting and innocent kids. This crime against humanity has been supported by the government of Ukraine, and also successive governments in Washington. Yet, these financers and allies of the Azov Battalion today have the gall to turn around and preach morality to the world.

Note: Russia has decimated the Azov Battalion in the ongoing war. The city it is based out of – Mariupol has been levelled. The Azov Battalion, for all practical purposes, is now dead.