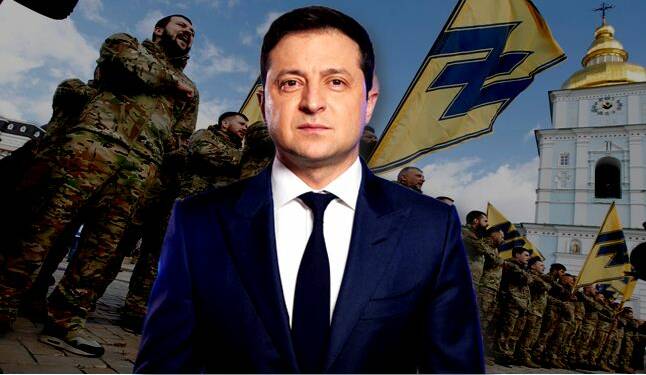 When Russian President Vladimir Putin launched the military invasion of Ukraine, he spelt out the main objective of the operation as “demilitarization and de-Nazification of Ukraine, as well as bringing to justice those who committed numerous bloody crimes against civilians”.

However, the US Ambassador to Ukraine insisted, “There are no Nazis in Ukraine.” So, who are these neo-Nazi groups that Putin talked about? And is the Ukrainian government Nazified?

In Western Ukraine, Even today, easily one can find several monuments in Bandera’s honour. In 2018, authorities in Western Ukraine’s Lviv, which is 46 miles away from Poland, had announced that 2019 would be celebrated as the ‘Year of Stepan Bandera’. Poland and Israel had criticised the move for some very obvious reasons.

But it’s untoward to just snide away this as a tale of the distant past. I mean we don’t look down upon Berlin for the crimes that Hitler committed over seven decades ago. So, why should we condemn Kyiv for collaboration with Nazis during the Second World War? Well, this is where neo-Nazi groups come into the picture.

The Maidan protests and resurgence of far-right groups

Ukraine is broadly divided into two halves- the pro-Russia East and pro-West Western Ukraine. In 2013, then Ukraine President Viktor Yanukovych decided to suspend preparations for an association treaty with the EU and sought closer ties with Russia. Yanukovych was a pro-Russia President and therefore the pro-West faction of Ukraine was enraged. So, the Euromaidan protest started in 2013.

Throughout the 2013-14 protests, violence erupted across Kyiv, Lutsenko, and Klitschko. And soon, there emerged several ultranationalist groups, including Svoboda, C14, Right Sector, Traditsii Pooryadok {Traditions and Order} and Karpatska Sich. Some of them were well-armed paramilitaries and others were small street gangs, but they all shared some common traits- violent involvement in anti-Semitic violence, attacks on Roma gipsies, LGBTQ and feminist activists.

These groups played a pivotal role in overthrowing the Yanukovych administration. The Right Sector chief Dmytro Yarosh was the one who rejected an agreement to hold elections in Ukraine in 2014. He even led a march on Parliament to overthrow the government.

A phone conversation was also leaked in 2014, in which US Assistant Secretary of State Victoria Nuland and Ambassador Geoffrey Pyatt talked about Svoboda party founder Oleh Tyahnybok as one of the leaders they were working with.

How powerful are these neo-Nazis in the Ukrainian government?

Well, they were powerful enough to dislodge Viktor Yanukovych’s administration. So, they do hold some influence. However, they have no representation in the Ukrainian Parliament, which means that they don’t enjoy popular support in Ukraine.

Yet, it doesn’t fully depict that they didn’t enjoy any clout. They relished good representation in Ukraine’s internal security and police forces since 2014. The Petro Poroshenko government that came to power after the 2014 coup patronised these far-right groups and normalised their violent behaviour.

In fact, the speaker of the last Parliament in Ukraine was Andriy Parubiy, founder of Svoboda and Patriots of Ukraine. The chief of police in Kyiv was Vadym Troyan, a former Colonel in Azov Battalion.

Interestingly, Azov Battalion that once started as a small ultra-nationalist militia grew into a full-sized battalion and was later upgraded into a Regiment in November 2014 and incorporated in the Ukrainian National Guard. It espouses white supremacism and neo-Nazism. In fact, far-right groups like the Azov Battalion and the Aidar Battalion were also accused of committing human rights violations in the rebel-held territories of Donetsk and Luhansk. The same two provinces have now been recognised as independent Republics by Russia.

In 2014, even Amnesty International had said that armed volunteers of the Aidar battalion had been “involved in widespread abuses, including abductions, unlawful detention, ill-treatment, theft, extortion, and possible executions.”

Anyhow, in 2015, the Poroshenko government brought a new law that named UPA and OUN, two former organisations which were known to have supported the Nazi cause, as heroes of Ukraine. Denying their heroism was criminalised in Ukraine and similarly, SS Galichina, a Ukrainian military unit that had fought alongside Nazi Germany forces in the Second World War is now honoured in Ukraine.

Neo-Nazi and far-right groups have thus got integrated with the Ukrainian security forces which will invariably spurt doomsday into the already warn torn country in Eastern Europe. The West is dismissive of such allegations but the fact remains that the Ukrainian government is patronising neo-Nazis.