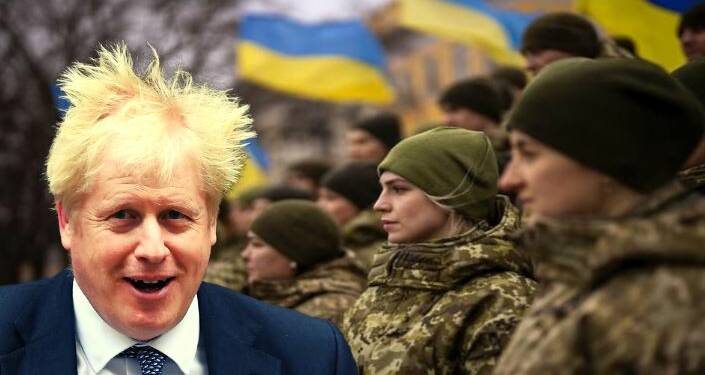 Every single government in the Western world wants to claim that it supports Ukraine, but when it comes to actually supporting Ukraine, they back out. Take the United Kingdom for instance. The Boris Johnson government has repeatedly condemned Russia’s invasion into Ukraine. However, Boris is now warning his country’s soldiers and civilians against travelling to Ukraine and fighting against Russia.

The British Prime Minister was asked about reports of a 19-year-old civilian from Warrington travelling to Ukraine to join the resistance effort against the Russian invasion. Boris replied that he understood why people wanted to help, but still advised them to stay in the UK and avoid going to Ukraine.

The British PM said, “I think that everybody seeing what’s happening in Ukraine will understand those feelings.” He added, “I think many people, many people in our armed forces, will sympathise because I don’t think I’ve ever seen such a clear distinction in international affairs between right and wrong and good and evil in what President Putin is doing to people in Ukraine.”

Yet, Boris warned, “But we have very clear laws in this country. You shouldn’t go to Ukraine, and I’m afraid people going from our armed services, as the chief of the defence staff made clear the other day, will face court martial.”

Boris Johnson’s remarks are quite significant as there are reports of few serving British personnel allegedly going absent without leave to travel to Ukraine and fight against Russian forces. In fact, even British veterans and civilians have travelled to Ukraine.

Britain has actually taken an about turn on the issue. Earlier, Foreign Secretary Liz Truss had said that she would back Britons who go to Ukraine to fight against Russia.

However, Truss faced criticism and it was pointed out that her own department’s website stated that those who travel “to fight, or to assist others engaged in the conflict” could be prosecuted after they return to the United Kingdom. The UK Ministry of Defence officials too have issued a ban that prohibits all service personnel from travelling to the war-torn country “until further notice”. They have also warned that soldiers violating this ban will face prosecution.

Why is the UK threatening its soldiers with court-martial?

Now, you may wonder why this is becoming a huge issue in the United Kingdom? Well, the UK government doesn’t want to get dragged in the Russia-Ukraine war and believes that participation of British soldiers or civilians in the war could be perceived as an act of aggression by Moscow. The UK doesn’t want to engage in a full-fledged military conflict with Russia and this is why it is issuing advisories against any effort to join the Ukrainian resistance.

The UK Chief of the Defence Staff, Adm Sir Tony Radakin too warned that people should not “rush to … the sound of gunfire” and advised that support be offered in other ways.

The UK is going to engage in sheer propaganda against Russia. However, it seems that London wants a hands-off approach to the Ukraine crisis. And therefore, it will punish any soldier who decides to travel to Ukraine and fight against Russian forces.