The people of Peru decide that enough is enough, and now a violent coup is underway 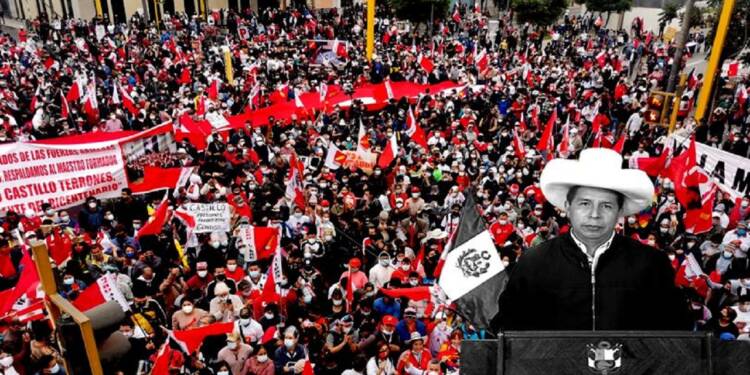 The copper-rich South American nation has been wracked by political turbulence in recent years, with four Presidents and two parliaments changing hands in the last five years. Amidst this, Pedro Castillo’s win was seen as a major symbolic victory for the Left in Peru.

His path from being a schoolteacher to becoming the President of Peru has been nothing short of a fairytale, startling the country’s business and political elites while thrilling the general populace, who hoped he’d bring the much-needed economic reforms and economic plus social stability. But eventually, he failed to do so, and with increasing social unrest in the country, a violent coup seems to be underway.

Since Pedro took the office last year in July, he has been consistent in committing blunders. In fact, according to the recent polls, his approval rating has slipped to around 25%. His falling popularity has been attributed to sky-high metal prices and growing general inflation. Peru’s yearly inflation rate has reached a 24-yr-high under Castillo’s presidency, providing yet another set of problems for President Castillo. His administration has been accused of massive corruption and society has seen a surge in the crime rate. The number of social conflicts is up by 7%.

All this while, Castillo has escaped two impeachment attempts in the period of eight months. In fact, he has replaced his cabinet members at a greater rate than any other government in recent history, having just selected his fourth new cabinet.

Read More: Whoever wins in the Peruvian election, the biggest loser is going to be Jinping

Castillo is likely to be ousted

Moreover, within a few days of his assuming the president’s office, Castillo quickly extended a friendly hand to China.  But Castillo’s inclinations are not well appreciated by Peruvians as a whole.

People appear to be wary of Chinese tendencies, as evidenced by the recent rallies against the Castillo-led government. These protests are primarily led by copper mine miners who were promised high profits from the sale of copper ore to China by Castillo, but Castillo did not keep his commitments.

And now, at a time when the Andean country is grappling with weaker development and high global inflation, the protests have shut down a combined 20% of Peru’s copper production.

“Under this administration, there are a greater number of mining protests and they are more serious,” said Pablo O’Brien, a mining expert who worked as an adviser to several mining ministers, including under Castillo.

In the midst of the growing protests, the PCM’s leader warns of a possible coup against President Castillo. Meanwhile, Castillo shows no signs of backing down in the face of escalating protests in the Andean region’s mining districts. Castillo, like every other leftist authoritarian, espouses his contempt for democracy by preparing to suffocate the country’s already enraged population.

If the incumbent president continues on his current political path, it remains to be seen whether Castillo will be able to complete his full term in office.