Has Russia invented a lethal anti-drone technology that has made Zelensky panic? 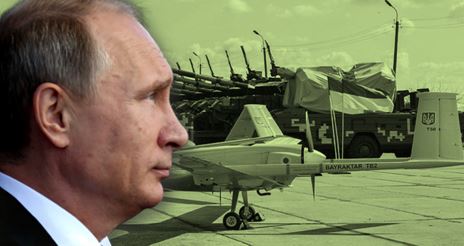 When the 2020 war of Nagorno-Karabakh between Armenia and Azerbaijan broke out, the world got to learn some far-reaching military lessons. Armenia was fighting with tanks, while Azerbaijan relied heavily on Turkish Bayraktar TB2 drones and Israeli Kamikaze drones.

An antidote to Turkish Bayraktar

And the end result of this clash was out very soon for everyone to see. It happened after decades that a war has ended with a clear winner and a loser. Armenia had lost the war, and the world came to realize that the future of warfare was changed forever. The world truly realized the potential of drone warfare.

Perhaps, Bayraktar’s ruthlessness was what stopped Russia from coming to its decades-old ally Armenia’s rescue by not invoking the Collective Security Treaty Organization or CSTO’s provisions. Russia understood that Turkey’s Bayraktar drones had revolutionized the conventional warfare forever, finding an antidote to which was necessary to sustain Moscow’s military dominance in the region.

And soon Russia’s worst fears would come true. Merely a month after Armenia’s defeat in the Nagorno-Karabakh conflict, Ukraine showed its interest in purchasing 48 Bayraktar Tactical Block 2 drones from Ankara to bolster its air defenses. The lethal equipment that decimated Armenian tanks and artilleries was about to land at Russia’s borders. For Russia which boasts the world’s strongest tank armada with more than 22,000 battle tanks, the news of Ukraine seeking to arm itself with Bayraktar drones was nothing less than a nightmare scenario.

Over the past one-and-a-half-year, Ukraine has acquired dozens of Turkish advanced drones that the country has now deployed to stave off the Russian military threat. But suddenly, Turkish drones are now proving to be a damp squib in the ongoing Russia-Ukraine military conflict. Although various media outlets have reported that the Turkish drones have successfully been striking the Russian military very hard, Ukrainian president Volodymyr Zelensky’s recent statements suggest the exact opposite.

Zelensky takes a jibe at Bayraktar

Defence view reported on 25th April that the Turkish advanced drones failed to play a decisive role in the Russia-Ukraine conflict. Zelensky himself said that Bayraktar drones didn’t affect the end result of the war. “With all due respect, those or other drones can help but do not affect the result. Because there is a history of missiles, artillery, air defense” Zelensky said.

The media report also revealed that the glorification of Turkish drones throughout the Russia-Ukraine crisis could be a part of Ukraine’s disinformation warfare against Russia. Also, videos being circulated on the internet showcasing Bayraktar’s assault on the Russian forces are videos of a single attack from different angles.

So, does that mean that Russia has finally found an antidote to Turkey’s advanced drone warfare that left Armenia incapacitated just two years ago?

Well, the answer is yes. Russia has spent the last two years decoding Bayraktar’s specifications through the experience that it acquired by fighting off the Turkey-backed Government of National Accord in Libya.

The Bayraktar was used two years ago in Libya by the Turkey-backed government and proved successful in conducting precision strikes, but went unsuccessful when providing close-air support for ground movements, as the system was susceptible to air defence.

Mauro Gilli, senior researcher in military technology and international security at ETH Zurich, said that “Drones like the TB2 are vulnerable to anti-air defence systems. To be effective, they need to be employed in a savvy way, in coordination with other electronic warfare systems that ‘blind’ enemy radars and through appropriate tactics.”

A Qatar-based portal known as Al-Jazeera quoted Mauro Gilli as saying that “against capable enemies, these technologies and tactics might not be sufficient. In Libya, Russian forces figured out effective ways to counter Turkish tactics and shoot down their drones. The same [has been] observed in Syria and Nagorno-Karabakh.”

So, it can be said that Turkey’s Bayraktar drone warfare is not invincible any longer. And that’s what has now made Zelensky super Jittery and anxious.