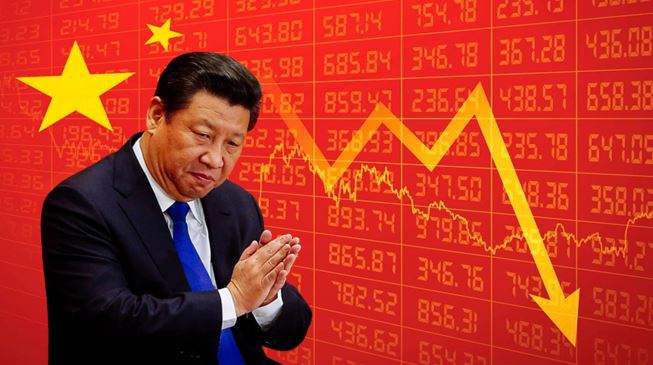 Xi Jinping’s master plan to paint a rosy picture of the Chinese economy is driving the CCP acolytes to fight an uphill battle that is beyond their reach. The Chinese president has ordered his senior confidantes within the party about the need to project China’s one-party system as superior to the much-touted western democracy. In his zealous pursuit of this goal, Xi is pressuring senior officials to ensure that China’s GDP growth rate in the current fiscal year outpaces that of the United States.

With Xi fortifying his base within the party as the unrivalled one, his current call to rev up the Chinese economy carries weight. The authoritarian leader’s path to reach the economic target remains dubious; nevertheless, the Chinese officials are feigning optimism with reaffirmed hopes of achieving the annual target that could bypass the USA.

Earlier this month saw China surviving a scary fourth covid wave in Shanghai, the megalopolis that nests the top-tier companies around the world. CCP’s strict enforcement of zero covid policy along with the shutdown of factories and a massive crackdown on the private sector has put the once-rising lucrative companies in a mesh.

CCP is wary about the scepticism within the investors and companies. Thus to meet their demands, some tall talks from the government officials to pacify these sections went ahead at the behest of Xi Jinping.

Read more: China’s ‘Strong 100’ are now drowning and it will cost China almost 30% of its GDP

Economic analysts are left with no answer when it comes to predicting China’s ascension to the summit of the world economy. Economists have also worded concern regarding China’s strict imposing of a zero-tolerance policy that may stand as a hindrance to the proposed target anticipated by Xi.

There stands another interesting premise that may haunt Xi’s dream. More than 340 million people that contribute to more than 35% of China’s GDP are under lockdowns, owning to the disastrous fourth covid wave. It’s in contrast to the consumer sentiments in the US where the confidence among the people stands higher even after the policy debacles at the hands of Biden.

Moreover, when it comes to achieving growth, China seldom takes the hard way. Employing a hard way playbook is boring by Chinese standards. The aching need to counter the US hegemony over the world economy has broadened the devious politicking that China often rides in.

What Is the GDP Price Deflator?

“The GDP (gross domestic product) price deflator, also known as the GDP deflator or the implicit price deflator, measures the changes in prices for all of the goods and services produced in an economy.”

Now, what is China doing differently on it when compared to the advanced economies, in order to hide its scary numbers?

With the target to be achieved remains a far cry, China is using a single deflator to calculate the real GDP growth. It is different from what is practised by advanced economies that use a wide range of price measures to calculate the real GDP growth. Often observers of the Chinese economy have voiced concern regarding this practice as deviating from the real growth performance.

When it comes to the single deflation approach, the actual changes in input prices differ from that of output prices, and according to CPER research, In the Chinese reality, given various market distortions, it is naïve to assume that changes in input prices are the same as changes in output prices. So the ambiguity between the changing prices never made it to the real GDP calculation in China and thus Beijing moved the pieces assiduously to stamp itself as a thriving economy compared to other advanced nations.

The Ukraine war may give leeway for China to make upshot within the economy to a large extent but the insurmountable target from Xi is nothing but a political ploy to shift focus from the rising job crisis and the fall in living standards that China encounters now.