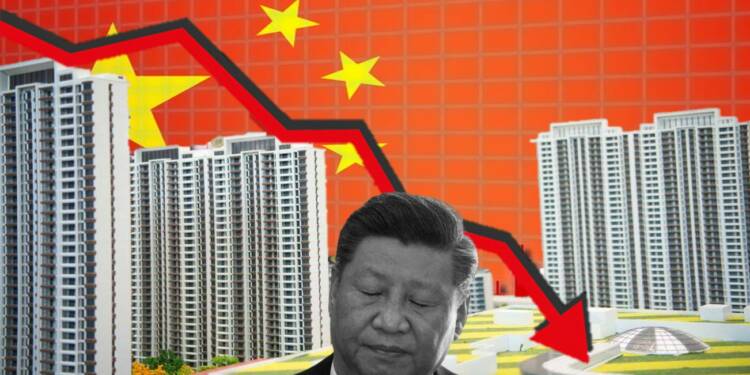 China’s real estate sector keeps bringing bad news for Xi Jinping, and the worst is here. The ailing sector could wipe out 30 per cent of China’s GDP.

China’s real estate crisis has derailed the “Strong 100”— a term that is used to describe the top 100 real estate companies in the Communist nation.

CRIC Research, a private research institute, has reported that the total sales of the “Strong 100” stood at $117.5 billion in the month of November, registering a staggering 3.4 per cent decline from a month earlier.  Not only this, compared with the same period last year, the sales of these ‘Strong 100’ have come down by a whopping 37.6 per cent!

Also Read: China could lose 68% of its global net worth

It is commonly accepted that 30 per cent of China’s GDP is dependent on real estate development. 30 per cent! So if spill-over effects are also factored in, almost one-third of China’s economy is in serious trouble, and things only look bleak from here.

Why Chinese real estate sales are going down

You see, it all started with the Evergrande crisis. And the collapse of one real estate giant has set in a chain reaction, with a series of big real estate developers defaulting on debt payments. Before Evergrande, four companies– Fantasia Holdings, Sinic Holdings, Modern Land China, and China Properties, defaulted on offshore notes.

Evergrande has itself defaulted already over its failure to make two coupon payments by the end of a grace period. Shimao Group Holdings Ltd. – another real estate giant of China is on the verge of collapse as well. The “Strong 100” companies too seem to be moving in a downward trajectory, and if the crisis continues, you could see many big names in the real estate market tumble in the coming months.

Read More: China’s Evergrande finally defaults and foreign investors may never get their money back

So, six companies in China have been hit by the ongoing real estate collapse. And as a repercussion of this turmoil, the future of real estate development in China is looking bleak.

House prices, sales, and real estate investment— everything is going down in China. In November, new home prices fell 0.3 per cent month-on-month. This is the biggest decline since February 2015. Meanwhile, the actual value of home sales went down by a massive 16.31%. New construction, when measured by floor area, fell 21.03% on year in November. Property investment by developers too fell 4.3%.

Amidst the ongoing real estate crisis, prospective Chinese home buyers have turned pessimistic. Several housing projects in the country have stalled, shattering the dreams of many prospective home buyers.

The angry and depressed buyers who have lost a significant share of their life savings in failed housing projects now neither have the courage nor the willingness to invest in new projects. Imagine paying for an apartment that was never built and never getting your money back! With dropping demand, the Chinese real estate market can neither launch new projects nor can it bring in more investments.

The property developers in China or any other country for that matter raise money from prospective homeowners. A part of the sale price is paid upfront, even before the housing project is completed and the possession of a residential apartment is usually given after the payment plan is completed. This is how housing projects work.

However, China is now full of prospective homebuyers who pumped money into projects that have stalled midway. Such people lost all the money that they had saved for purchasing a home, and now they are simply not ready to put their money into new projects. The shaken investor confidence has brought Chinese real estate development to a grinding halt.

Read More: ‘Don’t invest in China,’ Evergrande sends a beautiful message to investors all over the world

This is really bad news for China. Remember, what I told you in the beginning. The Communist nation pumps up its GDP numbers through construction activity— it builds tall skyscrapers that attract investments from abroad. Now, as real estate in China goes down uncontrollably, we are looking at a possible contraction of 14 to 30 percent in the Chinese GDP. This is going to push foreign and local investors away from the Chinese economy and practically bring the Chinese growth story to a dead end. Afterall, the ‘Strong 100’ are now the ‘crippled 100’.