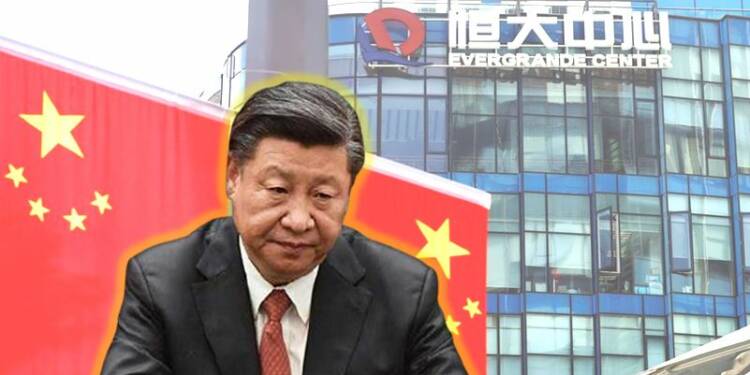 What was feared has finally come true, as China’s real estate giant Evergrande has taken the final few steps to plunge the country into a deep economic crisis. Reportedly on Monday, Global credit rating agency – Fitch Ratings, cut Evergrande to “restricted default” over its failure to make two coupon payments by the end of a grace period. The failure might trigger cross defaults on the developer’s $19.2 billion debt.

Once considered too big to fail, Evergrande had disclosed more than $300 billion of total liabilities, as of June. While the Shenzhen-based company’s demise was purely a market failure, its market resolution still lied in the hands of the Chinese government.

However, owing to Xi Jinping’s incessant urge to tame the country’s over-indebted conglomerates and overheated property market, in addition to the tech giants, Evergrande finds itself at the moment of reckoning.

The stock market in China fears a contagion effect from Evergrande’s debt default hitting the property and banking sectors. This contagion effect has escalated the risks associated with investments inequities. A massive restructuring of the world’s most indebted company is required, but perhaps it might amount to nothing in the end.

Also read: How India fixes massive debt-ridden companies versus how China skewers it

The problem with investments in China are hardly limited to the China Evergrande Group alone. The entire Chinese real estate sector is in trouble. The real estate bubble in China is simply too fragile and almost about to pop. China Evergande Group’s downfall is being described as China’s ‘Lehman’ moment, and real estate groups like Fantasia Holdings have already shown signs of falling in a debt crisis.

Going ahead, a number of Chinese real estate giants that had relied on heavy borrowing through both onshore and offshore debt instruments to finance construction of useless infrastructure, could face a difficult situation.

The dire straits of the sector can be gauged by the fact that real estate giants of China form 36% of the $10.2 billion worth of offshore bonds that they have defaulted upon, in the year 2021.

These offshore investors should not get their hopes high of receiving any payout, as the Chinese government appears more intent on maintaining its social credibility in the country. Hence, homeowners, employees, and individual investors in wealth management products, will be receiving priority.

A lesson for investors across the board:

China Evergrande Group’s situation is a big lesson for foreign investors- if you invest in China, do so at your own risk because there is no security of return and Beijing will start looting you at will.

Reported extensively by TFI, the entire Chinese economy is deeply debt-ridden today. Last year, the Kingold scam surfaced, which showed how 4% of the communist nation’s gold reserves were fake.

A debt crisis is presently looming large on the Chinese economy, as many of its leading private firms, state-owned enterprises, and regional banks are defaulting frequently.

Also read: ‘Don’t invest in China,’ Evergrande sends a beautiful message to investors all over the world

The risks involved with bailing out Evergrande are simply too high. If Xi decides to help Evergrande avoid default, then it might send a wrong signal to Chinese businesses that consider themselves “too big to fail”.

Such businesses could start taking excessive risks because the government would help them anyway if they run into trouble. Xi is facing a conundrum that invariably gets attached to the collapse of corporate giants. It’s a classic Catch-22 situation for the Chinese government and by the looks of it, Xi is not willing to bail Evergrande out.

Taiwan and India are hitting back at China with a wave of cyberattacks, CCP admits