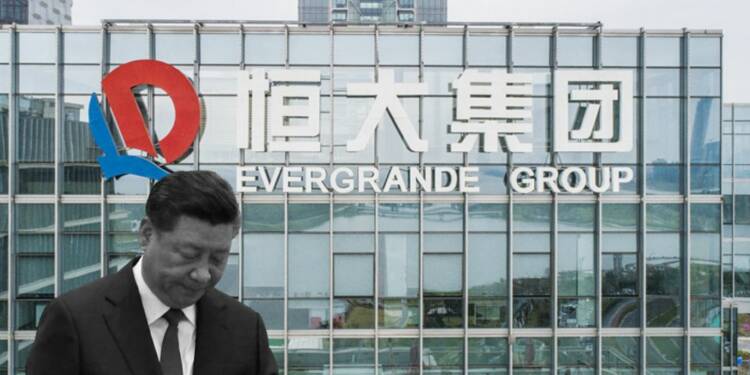 Evergrande Group, China’s second-largest property developer, is about to collapse at any time due to its unsustainable debt burden, downgraded credit rating and a very real possibility of default by the real estate group. Ever Group’s imminent downfall is, however, hurting the entire Chinese economy including its stock markets.

The past week recorded the worst performance by Chinese stocks in the entire month. A small rebound did take place on Friday, yet Hong Kong’s Hang Seng Index (HSI) and mainland China’s CSI 300 gauge ended the week down by 3 per cent each.

Chinese stock markets are already in very poor shape with President Xi Jinping’s brainless crackdowns harming the investor sentiment in the Communist country. In fact, HSI remains one of the world’s worst-performing indexes this year, this quarter and even this week.

Chinese stock investors were thinking that the stock markets will finally recover from the effect of Xi’s regulatory crackdowns, but Evergrande’s financial troubles seems to have dashed their hopes.

Simply put, Evergrande is too big to fail for China. If it defaults, then it could be the final blow for China’s highly strained economy. Evergrande’s dipping fortunes could hit China’s real estate market, ultimately affecting everything from the jobs market to property prices.

Evergrande Group has become the victim of a common Chinese problem- debt burden and tight liquidity. The real estate developer had also run into debt troubles last year, but it has averted the crisis with help from the government and wealthy friends. However, Chinese authorities imposed rules known as the three red lines to determine whether companies can take additional borrowings. After the new rules were imposed, Evergrande again fell into trouble.

In fact, the entire Chinese economy is deeply debt-ridden today. Last year, the Kingold scam surfaced, which showed how 4 per cent of the Communist nation’s gold reserves were fake. A debt crisis is presently looming large on the Chinese economy as many of its leading private firms, State-owned enterprises and regional banks are defaulting frequently.

Why the downfall in the real estate sector hurts the entire Chinese economy:

From a Chinese perspective, the real estate sector becomes a critical driver of economic growth and prosperity. The Communist nation has traditionally relied on the real estate market for its economic development, fuelling wealth generation and improving investor sentiment. Even when the Chinese economy was confronted with sluggish growth or the stock markets tumbled, Beijing relied on real estate development to stimulate growth.

However, the Chinese real estate sector is now well past its saturation levels. The housing bubble of China is set to burst as 65 million apartments in the country are empty, which is also why a property giant like Evergrande Group has landed in a precarious situation.

China kept milking its real estate and housing sector, even when simple maths established that there was no real demand for new homes. Superficial enhancement in housing prices did create an illusion of wealth generation but is quite clear that building new homes won’t really stimulate new investments in China.

Yet, the real estate sector remains critical to the overall health of the Chinese economy. At the end of the day, the consequences of the downfall of the country’s second-largest real estate developer are bound to create a chain effect. Creditors, investors, shareholders and other interests associated with Evergrande or even the Chinese housing sector, in general, are bound to feel the pain of Evergrande’s imminent downfall.

There is no clarity as to whether Xi will intervene and bail out Evergrande Group. Meanwhile, as the real estate giant comes closer to a sudden downfall, panic seems to be setting in the Chinese stock markets and creating what can be described as sheer carnage.