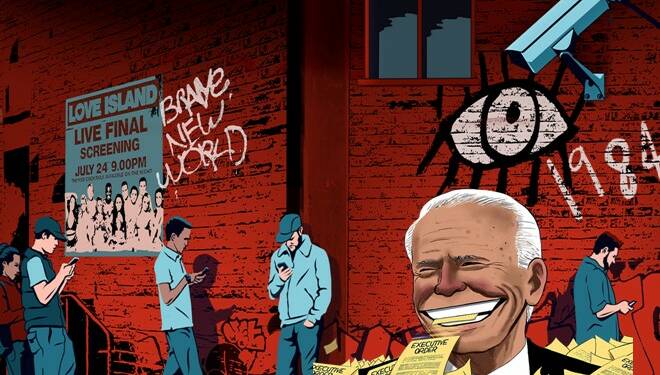 Internet users in the US are worried about the USA’s Department of Home Security (DHS) setting up a new Disinformation Governance Board. They feel that this board is going to function as the ‘Ministry of Truth’ from George Orwell’s ‘1984’.

Read more: The New York Times wants Joe Biden to start a ‘Ministry of Truth’, headed by a ‘REALITY CZAR’ to tackle ‘misinformation’

The Orwellian “Ministry of Truth” functions as a propaganda branch of Big Brother, the dictatorial leader of the fictional totalitarian state Oceania in Orwell’s 1984.

Though described as the Ministry of ‘Truth’, it happens to control all forms of information – news, education, entertainment and art. The purpose is to delete old historical records and publish new information so that history is brought in line with Big Brother’s current pronouncements.

The board under the Biden administration is being set up to coordinate countering misinformation related to homeland security. The board will focus ‘specifically’ on irregular migration and Russia.

The board is to be designed as a means of ‘countering misinformation’. Again, this is a hyper-partisan effort to remove whatever the other side says as ‘misinformation’ and push through your own propaganda. This is what makes Biden’s Disinformation Governance Board a 21st century “Ministry of Truth”.

And this is exactly what is making Americans worried. Donald Trump Jr tweeted, “…So to make sure there are no abuses of power we are going to create a hyper-partisan government-controlled Ministry of Truth!!!”

The Biden Administration creating a DHS 'Disinformation Governance Board' is nothing more than a Ministry of Truth set up to silence opposition.

Why should the Americans be worried about the “Ministry of Truth”?

Jack Posobiec, a veteran Navy intel officer, has explained why the upcoming misinformation board is going to be problematic.

There are very serious issues at hand. The board will be headed by a hyper-partisan Nina Jankowicz – the same woman who had once claimed that armed Trump supporters would show up to the polls to intimidate voters. Really, is she the one who will control misinformation in the United States?

But then, this is how the Orwellian Ministry of Truth works. The very definition of ‘truth’ is reinvented and truth and misinformation are interpreted as per ideological convenience. So, what Jankowicz had said about Trump supporters may be made into truth by the Disinformation Governance Board.

And wait, because it gets even better. Nina Jankowicz has previously worked as an advisor to the Ukrainian government under a Fulbright-Clinton Fellowship.  She also has a past record of dismissing Hunter Biden’s infamous laptop as a fake story and blaming Trump for the controversy instead.

So, we know exactly what kind of ‘misinformation’ Biden is trying to control. He may utilise Nina Jankowicz, the head of the impending Disinformation Governance Board, to keep information regarding his and his son Hunter Biden’s multiple misdeeds under control. And this is how Biden is enacting the Orwellian “Ministry of Truth”.