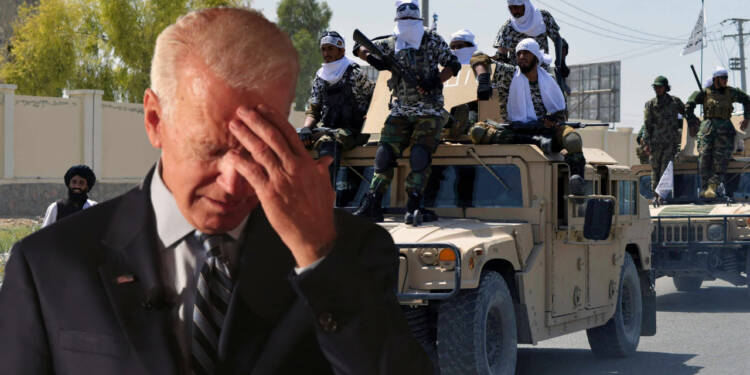 No one will forget the dreadful news and graphics from Afghanistan in 2021, when the United States decided to depart the country in turmoil, allowing the Islamic extremist Taliban to reclaim power. There is now an update on when the United States of America chose to depart Afghanistan. Many categories of defense arsenals were left behind. The total value of the residual is projected to be a whopping $7.2 billion dollars.

These military assets have now fallen into the hands of the Taliban, well thanks to God that these Mujahids have not made it operational yet. But, The US Defense Department also has made it clear that there are “no intentions” to either retrieve or destroy the Taliban’s remaining armaments.

The weapons are a huge win for the Taliban. But it’s also a major boon for China, the world’s greatest foe and Biden’s secret bromance.

The Defence Equipments and its Maintainance

The United States gave a massive amount of equipment to Afghanistan’s military throughout its long-running 20-year war against the Taliban. Between 2005 and August 2021, the US military dispatched $18.6 billion in equipment to the Afghan National Defense and Security Forces (ANDSF), including aircraft, air-to-ground bombs, combat vehicles, weaponry, and communications technology. But Taliban extremists seized a large amount of military hardware during the quick Afghanistan departure.

Out of this, $923 million worth of aircraft were abandoned at the Hamid Karzai International Airport in Afghanistan, including 78 aircraft that were originally acquired for the Afghan government. Before totally departing from the country, the US military claims to have demilitarised and rendered the jets useless.

However, there is a catch: this is where China enters the scene. Did America know that China is a master in reverse engineering?

What could happen if China gets its hands on the abandoned equipment?

Read More: From Taliban to Hezbollah, China is empowering Islamists around the world

Since the 1960s, China has excelled at reverse engineering.  The Chinese have learned to fine-tune the reverse-engineered product and make certain modifications to give it an entirely distinct look.

In 2018, photographs and videos of the Chinese J-20 stealth fighter were uploaded online, the images revealed that the fighter jet has been in development for a long time and that it has undergone a significant amount of reverse engineering, effectively by ‘borrowing’ US technology. China’s new jet was completely based on a US’s abandoned plane.

Returning to Afghanistan, the Taliban has long sought recognition, and China has presented them with enough fruits from time to time, suggesting that they will recognize the regime when the conditions are ‘ripe‘.

Beijing is already eying dominance over minerals across the globe. Whereas, military dominance has been China’s ambition for a long time. There is a distinct possibility that Chinese engineers may arrive in Taliban-ruled Afghanistan and begin analyzing abandoned military equipment.

Read More: How could China exploit the Ukraine crisis to legitimize the brutal Taliban regime?

Furthermore, China can even take some of these residuals back to their home base in mainland China where they can research and modify them. This creates more tension that Chinese examination can easily give an upper hand over the USA.

Whether consciously or not, the United States has gifted China with a $7 billion jackpot in the shape of leftover defense equipment. If China provides maintenance or even reverse engineers these pieces of equipments for the Taliban or even for themselves, the world will be staring toward a disaster. And, Joe Biden after generating a whole new issue will avoid questions and stay in the Pentagon, always.