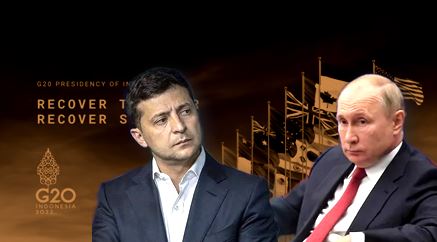 The conflict in Ukraine is already in its third month, with continual attacks on Ukrainian cities. Tensions are at an all-time high, and Russia is refusing to back down.

However, Ukraine’s narrative war has become so bleak that it has reached a point where its supporters are attempting to strike a balance. Indonesia, in particular, has made the most strident decision to balance the powers and bring the truth about Ukraine to the attention of the world, rather than Zelensky’s nonsense statements.

In November 2022, Indonesia will host the G20 Summit. As a result, Ukraine has been invited to the summit to discuss the ongoing issue. In addition, Russia will be present at the summit. So, this is going to be the first time when Putin and Zelensky will be sitting at one table.

Zelensky will be grilled

First and foremost, Russia is a key member of the G20, and President Vladimir Putin has confirmed his attendance at the conference. Indonesian President Joko Widodo claimed he received a phone call from Putin confirming his attendance. This confirms Zelensky and Putin are going to meet for the first time.

During the battle, a lot of lies and misinformation were propagated. Some of Ukraine’s statements have cast doubt on the war’s true picture around the world. For instance, Ukraine claims it killed thousands today and far more Russian soldiers yesterday. Around 23,000 Russian soldiers, according to Ukraine have been killed. But no one knows what is true because the names or any information of these soldiers have never been revealed.

If Zelensky arrives to take part, Putin and other nations will have the opportunity to question him for the first time. And honestly, Volodymyr Zelensky will be under a lot of strain if he attends the summit. Either he will not answer or he will not come. In all scenarios, Zelensky’s and Ukraine’s support will dwindle.

Indonesia has made one of the most astute moves in mankind. On one hand, the United States was pressuring Widodo to align with Ukraine. However, Indonesia’s move indicates that the country’s position on Ukrainian claims is already shaky.’

The decision to invite both presidents demonstrates the delicate balancing act that the Southeast Asian nation is attempting to achieve as the G-20 host this year. Russia is a member of the G-20, and the group’s members are divided on how to respond to Russia in the aftermath of the attack in Ukraine. As a result, if the battle continues to this day, this action will bring more clarity to the globe.

Another reason behind the Indonesian tactic can be Russia. The nation has been successful in changing the global narrative. Countries are now willing to work with it more closely. Moldova has already said that Russian gas cannot be replaced. And now, Indonesia has also stated that the best way out is ‘neutrality’.

Read More: How Ukraine lost the narrative war after being the darling of the world for good 45 days

The Indonesian initiative to bring Russia and Ukraine to the negotiating table has the ability to reveal to the world the realities of the conflict. In the meantime, Ukraine continues to make ridiculous claims in the battle. It is unavoidable that Zelensky’s claims will come back to haunt him.