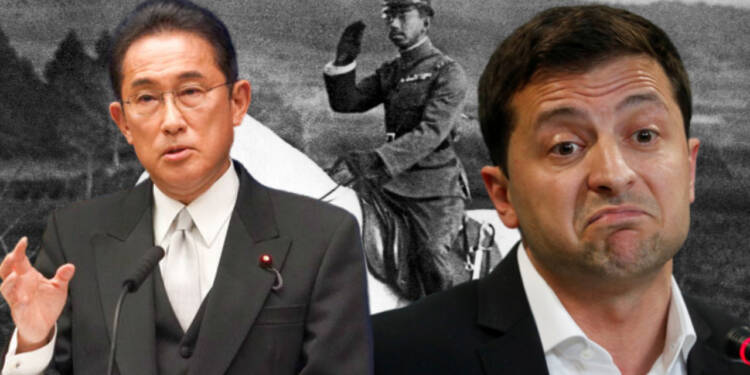 Japan is suddenly angry with Ukraine and might just stop supporting the country amidst the invasion by Russia.

Japan was the only big power in Asia that was ready to support Ukraine, whereas India has taken more of a neutral stance and China seems to be turning pro-Russia. So, what has really caused tensions between Tokyo and Kyiv? Let’s find out.

The ‘ruscism’ video that has angered the people of Japan

A video was recently posted on Ukraine’s official Twitter handle condemning ‘ruscism’ or ‘rashism’, with obvious parallels between Russia and fascism. In the video, Ukraine claimed that it will fight ‘ruscism’.

So, you might think that Japan shouldn’t be bothered about the video. Japan is a part of the US-led bloc and claims to fight against authoritarianism. However, the video includes photos of German dictator Adolf Hitler and Italian dictator Benito Mussolini, along with Japanese Emperor Hirohito.

Why Japan is angry?

Now, Emperor Hirohito happens to be a respected figure in Japan, even though he was the titular ruler of Imperial Japan during the Second World War. Ukraine’s tweet has left people of Japan fuming. Masahisa Sato, a Japanese politician belonging to the Liberal Democratic Party, said, “The Ministry of Foreign Affairs protested and requested the Ukrainian government to delete it, and the video in question seems to have been deleted.”

Was Hirohito really a fascist?

The Ukrainian video seems to make a casual remark. It presumes that since Hirohito was a wartime Emperor, he must have been a fascist. It seems logical too. But this is factually incorrect.

It is a documented fact that Hirohito had warned that the attack on the Pearl Harbour would be ‘self-destructive’. He is believed to have been a powerless figure, subservient to the orders made by the military leadership of Imperial Japan. It is believed that the decision to execute the Pearl Harbour attack against the US was that of then Japanese Prime Minister Hideki Tojo.

Many Japanese believe that instead of Hirohito, the image of Tojo should have been used in Ukraine’s video as he was the one who got convicted for war crimes. In fact, American military leader General Douglas Macarthur had reportedly maintained Hirohito’s innocence.

Now, Ukraine is in damage control mode. In response to Masahisa Sato’s remarks, Ukraine said, “Our sincere apologies to @japan for this mistake. We had no intention to offend the friendly people of Japan.”

An edited video has indeed been posted by Ukraine’s Twitter handle that has removed the wartime Emperor and carries only Hitler and Mussolini now.

However, the people of Japan happen to be proud people. They do not take their history and culture for granted. So, they are not likely to take the latest insult lying down. Till now, Japanese PM Fumio Kishida has been trying to support Ukraine by joining US sanctions against the Putin administration. Japan has gone so far as to try to persuade India to take severe measures against Russia.

But now, Japan is unlikely to support Ukraine. Japan is already trying to battle the stigma attached to it since the Second World era and has also been trying to shed post-War pacifism. Now, if a country is going to spread more negativity against it and that too by making negative comments about Hirohito, Japan will not let the matter go lightly.