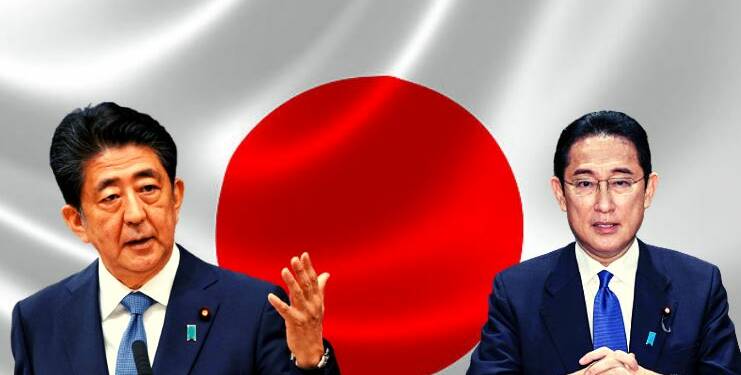 Forget China versus Japan clash over the Taiwan question; here we have two Japanese prime ministers publicly sparring over the issue. Yes, Former Japanese Prime Minister Shinzo Abe and current PM Fumio Kishida are on their way to a head-on collision regarding Taiwan’s defence in any case of Chinese invasion.

Abe recently said that Japan should host nuclear weapons. It should enter a NATO-style deal with the US and deploy US nuclear weaponry to keep China at bay. Secondly, Abe had also asked the Biden administration to relinquish its so-called strategic ambiguity position on Taiwan and to publicly express its support to Taiwan’s defence.

Kishida vs Shinzo Abe on Taiwan

However, Prime Minister Fumio Kishida was quick to reject Abe’s call to have a debate over Japan housing nuclear weapons. He said, “It is unacceptable given our country’s stance of maintaining the three non-nuclear principles.” Ironically, Japan’s fierce rival China appeared to echo Kishida’s concerns by saying, “We strongly ask Japan to deeply reflect on its history and be cautious in words and deeds on the Taiwan issue to stop provoking trouble”.

Both Kishida and China agree that Japan should never house nuclear weapons, which itself explains how the simpleton Prime Minister is dangerously exposing his nation to potential Chinese invasion and its very real nuclear threats. It’s commonplace for bellicose Chinese media to threaten Australia with nuclear strikes, and thus, for Japan to house and station nuclear weapons is totally rational and understandable.

Read More: Kishida’s Russia policy will be the end of him

Kishida—A China dove and a staunch opponent of nuclear weapons

Kishida was rightly labelled as a “China-dove” when he got enthroned to the PM chair last year. He hails from a constituency in Hiroshima, one of the two Japanese cities flattened by a nuclear bomb in the Second World War. Shinzo Abe understood that it was important to develop and arm his nations with nuclear weapons to prevent another nuclear attack in its vicinity.

Shinzo Abe spent his eight years in office diluting the restrictive clauses of Article 9 of the constitution and arming its defence forces to the teeth. He reinterpreted the clauses to better equip its Self Defence Forces and gave them the right to wage an offensive campaign on Chinese adversaries in case of any Chinese hostility. Shinzo Abe also made provisions to breach the 1% threshold on defence apparatus and gear up for upcoming challenges from the Chinese military.

This was a logical approach that even became popular among peaceful Japanese. The Japanese voters affirmed their support to the Abe administration that preparing for the war was necessary. Abe aspired of achieving strategic independence from the US.

Secondly, Abe made efforts to end the USA’s strategic ambiguity on Taiwan, which also got no backing from the Kishida administration. It seems like Kishida is not interested in countering China over the Taiwan question.

Abe in January stated it clearly that Taiwan’s security was linked to Japan’s own, and it was a national security issue for Tokyo. But the Kishida administration seems to be following its own path in determining its Taiwan and China policy, which may not bode well for Japan’s own security interests in the long term.