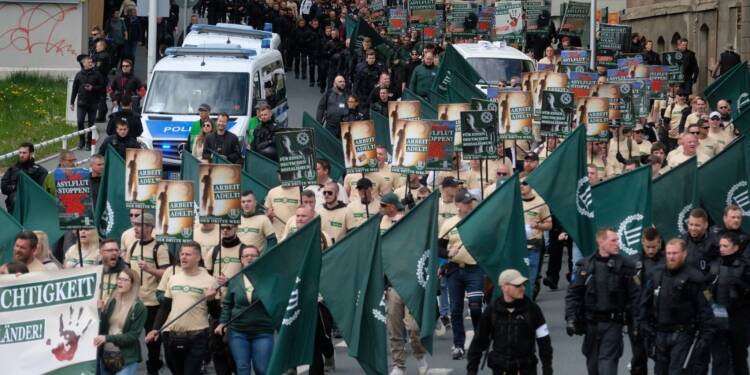 Germany is a NATO member. So, when the Russia-Ukraine war started, Germany supported Ukraine and condemned Vladimir Putin. It makes sense. But Germany’s support for Ukraine seems to have emboldened neo-Nazis and Hitler-sympathisers in the country, who are now looking to assert themselves and aid the resurgence of Nazism in Germany all over again.

The rise of neo-Nazis and white supremacists

Make no mistake, this is not just about Germany. The Ukraine war has mobilized neo-Nazi sentiments all across Europe and also the United States of America.

The Azov Battalion, a neo-Nazi group, headquartered in Mariupol, has also been looking to recruit neo-Nazi fighters.

Azov is a part of the Ukrainian National Guard, and despite facing accusations of torture, war crimes, and neo-Nazi ideology, the militia was brought under the administrative control of Ukraine’s Interior Ministry.

Writing for Washington Post, Rita Katz, Director of the SITE Intelligence Group, said, “We at SITE, an intelligence group tracking global extremists, have noticed a surge in online activity by white nationalists and neo-Nazis in conjunction with the war in Ukraine. Among the hundreds of individuals who have announced their intent to join Azov in recent weeks are several known neo-Nazis.”

Katz also wrote, “I haven’t noticed this level of movement-wide recruitment activity since the Islamic State declared its so-called caliphate in 2014 and sought sympathizers globally to join its fold.”

Neo-Nazi elements from the United States, Britain, Germany, France, Spain, the Netherlands, Sweden, Poland, and other Western nations are looking to join Ukraine’s resistance against Russia as would-be militants.

Why does Germany face grave danger?

Neo-Nazi elements may be coalescing from all around the world. However, it is Germany that faces the gravest danger.

After all, Germany was the birthplace of Nazism, and Adolf Hitler was a German leader.

Yes, Germany’s mainstream politics has moved far distant from its Nazi past. However, as per an estimate by Germany’s domestic intelligence agency, there are 13,300 violence-oriented neo-Nazis in Germany even today.

It can be noticed that German neo-Nazis seem to be somewhat inclined toward Ukraine.

Johannes Kiess, a far-right specialist, explained why neo-Nazis may be supporting Ukraine. He said that they are motivated by linkages to Ukrainian far-right groups. He also added, “There are also connections to Poland, and it’s not just a German-Ukrainian thing.”

And Azov, Ukraine’s neo-Nazi militia, has had ties with German far-right groups. According to an answer given by the German government to a question asked by the Left Party parliamentary group, Azov too has maintained contacts with the far-right movements in Germany.

One of such German groups is the III. Weg, or “Third Path.” The group consists of militant neo-Nazis and was formed back in 2013. The group has trained with Azov Battalion and has also invited Azov speakers in the past. The website of the neo-Nazi group states that it “rejects Russian imperialism to re-establish the Soviet Union”. The III. Weg has also vowed to help to flee Ukrainian nationalists.

In line with its racist policies, III. Weg sees Europe as an alliance of white nations, which explains its support for Ukraine.

Finally, there have been plenty of talks on social media about joining Ukraine’s war, possibly in alliance with the Azov Battalion. Right now, there is no evidence that German neo-Nazis have joined Azov against Russia. Moreover, German intelligence agencies have observed that only a handful of German neo-Nazis have shown the intention to join the fight.

However, the numbers of neo-Nazi Germans trying to join the war could swell as they start sympathizing more closely with the Azov Battalion and Azov too ramps up its recruitment drive.

German extreme-right envies Ukraine’s armed militias. And it is impressed by Azov too. There is every possibility of German neo-Nazis trying to implement the Ukraine model back home.

Germany, therefore, faces a potent threat of the resurgence of Nazism, and it could threaten the very foundation of peace and stability in the European continent by reigniting the deadly days of the dreadful Second World War.

Europe might become the birthplace of 3rd consecutive world war if things are not taken care of now.

IGU Meaning with Explanation and Definition