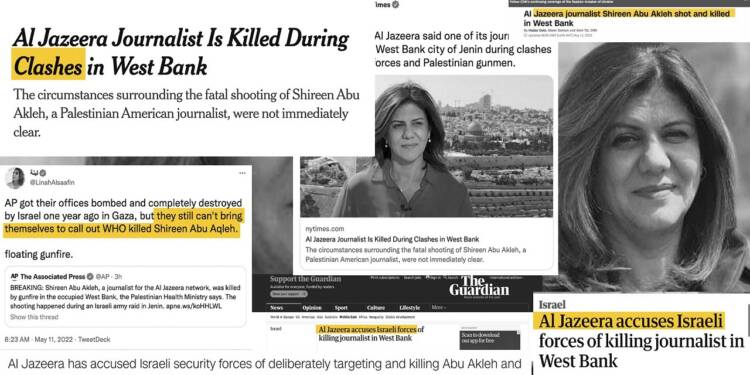 Recently Al Jazeera’s journalist was killed in the streets of the city of Jenin, West bank while covering a raid by the Israeli forces. Al Jazeera accused Israel of the killing of a journalist named Shireen Abu Akleh. The Qatar-based news agency says Israel in a planned way and intentionally killed the reporter on the duty. They have called it a cold-blooded murder at the hands of the Israeli forces.

Also Read: By emboldening Palestine to attack Israel, Biden has stuck a dagger right in the heart of Abraham Accords facilitated by Trump

Israel has denied the allegations

It alleged that Israeli soldiers were entirely to blame for the murder and that Shireen Abu Akleh’s death was a definite assassination by the Israeli army. It demanded that the journalists be protected from “continuous incitement and killing practiced by the Israeli occupation and all components of the occupation,” according to the statement. The International Federation of Journalists has said they will submit Abu Alekh’s case to the International Criminal Court (ICC).

But Israel has clearly refuted to take the accusations. Even the Israeli PM, Naftali Bennett, tweeted post this incident that there is no solid ground for these accusations. He tweeted, “According to the data we have at the moment, there is a good chance that armed Palestinians, who fired wildly, are the ones who led to the unfortunate death of the journalist.”

Tor Wennesland, the UN Special Envoy for the Middle East Peace Process, condemned the incident and demanded an immediate and thorough inquiry. Wennesland tweeted, “I strongly condemn the killing of Al Jazeera’s reporter, Shireen Abu Akleh, who was shot with live fire this morning while covering an Israeli security forces’ operation in Jenin, in occupied West Bank,”

Palestine refuses the investigation of the murder

International governments, including US and UK, have called for a ‘thorough investigation’. As a matter of fact, even the proposal for a joint investigation was put forward by the Israeli government. But no specific response came from Palestine’s side. To everyone’s surprise, even before her body was examined, she was buried quickly by the Palestinian authorities.

The hasty burial of the body without a thorough examination raises suspicions about the Palestinian authorities’ dubious motives. And this was done for a clear reason: Palestinian leadership does not want international censure for the crime committed by their terrorists.

Read More: A pro-Israel and anti-Palestine wave erupts in Kuwait

In actuality, Israeli officials said that there was a video of Palestinian gunmen gloating about killing a soldier, but that no Israelis were injured, implying that they shot a journalist. This indicates that Palestine is aware that the journalist was murdered by their own terrorists and that they are attempting to conceal the reality by hastening the burial of the journalist’s body.

‘No houses for Americans,’ as Biden reserves all of them for refugees