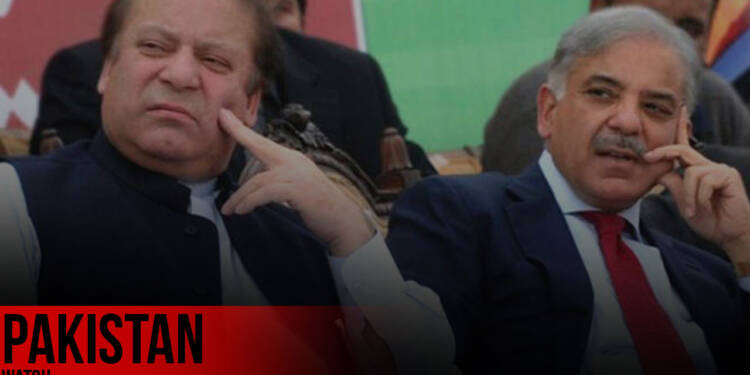 Things are not looking good for Pakistan. In fact, events this week served to prove that India’s neighbor to the North West is fast heading down the same road as India’s Southern neighbor, Sri Lanka. The similarities could not be more eerie. As the new government settles in, the chickens of economic mismanagement are coming home to roost. This, along with the manner in which the military establishment threw out the previous Imran Khan government, has caused massive instability and huge protests across the country. The family rule is also another striking parallel with Sri Lanka, with the Sharif brothers following a very similar pattern as the Rajapakse brothers

Despite the huge political build-up against the new government propped up by the military establishment, the big story that has consistently been missed in the past because successive governments have chosen to deal with it at a later date, but which can no longer be pushed into the future, is the economic crisis that is about to hit Pakistan.

As Prime Minister, Imran Khan had taken the populist step of capping fuel prices, and in the process, was forced to subsidize it massively. The new Sharif government decided to continue the same populist policy. The Prime Minister went against the advice of his own finance minister, who publicly advocated on at least two occasions that the prices be raised. The next review for fuel prices takes place on May 15th, and the Sharif government might be left with no option but to raise them.

This will only worsen the country’s inflation, which has currently accelerated to a rate of 13.37%. This is second only to Sri Lanka in the whole of Asia. Moreover, the country’s forex reserves stand at $10.3 billion, which is not enough to cover even two months of imports. What has made matters worse is that their currency, the Pakistani Rupee, is trading at a record low against the American dollar after tumbling more than 5% in a month. This is perhaps why the Sharif government might have no option but to raise fuel prices, and has also begun its recurring exercise of going to the IMF with a begging bowl. These are some of the factors that have caused Pakistan’s risk of default to double in just two months, prompting many to believe that another bailout is their only saving grace.

Read More: Pakistan Watch: Hina’s new boss Bilawal, Another round of begging in Saudi, Balochistan Vs China, and a Heroin Bust

This time though, it might be difficult for the Pakistanis to get a bailout from the IMF. Not only have they rubbed the Americans the wrong way in the past few months, but with the populist measures and the very public resistance by the Prime Minister to raise fuel prices, Pakistan’s job to convince the IMF that it is indeed serious and ready to make amends has become much more difficult. They might have fooled many countries and agencies on many occasions, but it is increasingly becoming impossible for Pakistan to fool everyone all the time.

Meanwhile, the military establishment has decided to go after Imran Khan, who is unwilling to relent. Khan had announced a march of two million Pakistanis from different parts of the country to the capital Islamabad, where they would gather and bring the country to a standstill until the military establishment would relent and declare fresh elections.

Imran Khan’s party the PTI had organized a series of Jalsas or rallies in different parts of Pakistan, which would help them gather momentum and finally culminate in the march to Islamabad. However, the final Jalsa in Sialkot was attacked by the authorities. In what can be described as Pakistan’s own JCB moment, the ground where the Jalsa was to take place was reduced to rubble by government bulldozers.

A senior leader called Usman Dar was picked up by the cops, and tear gas was fired on the gathered supporters. Many were brutally beaten up. However, the move has backfired on the government and the military establishment. Pakistani social media has erupted in outrage. Imran has shifted the venue of the rally and declared that he will be there. The rally is most likely to go as per schedule, only with heightened tempers and much more limelight. As the government fights a battle on the economic front, millions are all set to begin their march to Islamabad with the intent of bringing the country to a grinding halt.

Meanwhile, Prime Minister Shehbaz Sharif, who is battling these crises, faced severe criticism this week as he was seen with his brother and former Prime Minister Nawaz Sharif in London. Not only was it considered an abdication of responsibility at a crucial juncture, but the fact that he was going to London to discuss and seek advice, as reported, was interpreted by many as a sign that Shehbaz was merely a puppet Prime Minister, controlled from London. As if that was not enough, the puppet master was his own brother, inviting the family-rule charge against him too. Supporters of Imran Khan gathered outside the Sharif residence in London and made a scene there.

Meanwhile, the diaspora continues to earn a bad name. Now, it’s in a friendly country, namely Turkey. There is massive outrage against Pakistani immigrants this week after videos surfaced of them pretending to take selfies but actually filming unsuspecting women. As problems pile up domestically, the diaspora is not helping the country’s case either