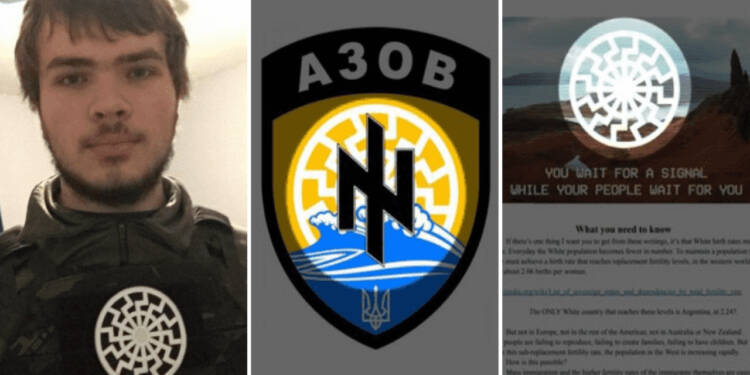 It was bound to happen. The Biden administration has been feeding a snake in Ukraine. Joe Biden has pumped billions of dollars into Ukraine over the past two months. Now, the snake that he has been feeding has struck back. In New York state’s Buffalo, 10 innocent lives were taken by a mad neo-Nazi who entered a shopping mall in a predominantly black area and live-streamed the massacre that followed.  The main suspect in the Buffalo shooting, 18-year-old Payton Gendron killed 10 people and injured at least three others in what is being called a “white supremacy”-inspired racial crime.

Be that as it may, American media is not telling you the entire truth. Interestingly, prior to launching the murderous assault on innocent citizens, the shooter released an online manifesto explaining his ideology. The manifesto prominently featured an alternate version of the Black Sun, and images circulating online showed him wearing it on his clothes.

Therefore, the shooter’s neo-Nazi ties and inclinations have been established beyond doubt. However, what kind of a neo-Nazi was Payton Gendron?

You’ve heard about the Azov Battalion, right? It is the neo-Nazi armed outfit that the United States has been financing for years now, more so since the Russia-Ukraine war broke out. The ‘Black Sun’ that the shooter used is also the Azov Battalion’s insignia. The gun he used had a racial slur on its barrel and the number 14, a white supremacist slogan.

Azov removed the sun from its official symbol in August 2015 (after lawmakers banned Nazi symbols), but the image still has its admirers in Ukraine’s armed forces, as a recent scandal on NATO’s Twitter page demonstrated. https://t.co/dzBRyyQSXM

Now, guess who the Buffalo shooter was inspired by? The man drew inspiration from Brenton Tarrant, a neo-Nazi who carried out a terrorist attack in Christchurch, New Zealand, in 2019. He too had a ‘Black Sun’ symbol inscribed on his rucksack. Interestingly, in 2019, American media did not shy away from reporting on the connections between Tarrant and the Azov Battalion.

The Agenda of Media This Time Round

This time, though, American media is following the agenda of silence and complacency. Not one major American media organization has reported on the potential inspiration which Azov Battalion gave to the Buffalo shooter.

The most sinister part of the media’s coverage of the Buffalo shooting is that it is being portrayed as a crime stemming from white supremacy alone. That most certainly is not the case. Payton Gendron’s white supremacist proclivities arose out of his neo-Nazi ideology. The neo-Nazi angle, however, is not being reported by anyone in the United States.

The Azov Battalion and the United States

Important to note is the fact that the Azov Battalion – which “officially” displays the Nazi SS emblem, is described by the Kyiv regime as “a volunteer battalion of territorial defense”. It is a National Guard battalion under the jurisdiction of the Ministry of Internal Affairs.

The U.S. has over the past several years provided military aid to Ukraine to strengthen the country’s ‘National Guard’. The Azov Battalion is a part of Ukraine’s National Guard, which effectively means that the United States has been funding and arming this neo-Nazi group that is accused of employing and training children to wage a war against Russia.

The question that now arises is this: Is the Biden administration stopping American media outlets from reporting on the neo-Nazi angle of the Buffalo shooter, and focusing on his ‘white supremacist’ inclinations alone? If so, the health of media in America is worse than what we thought.