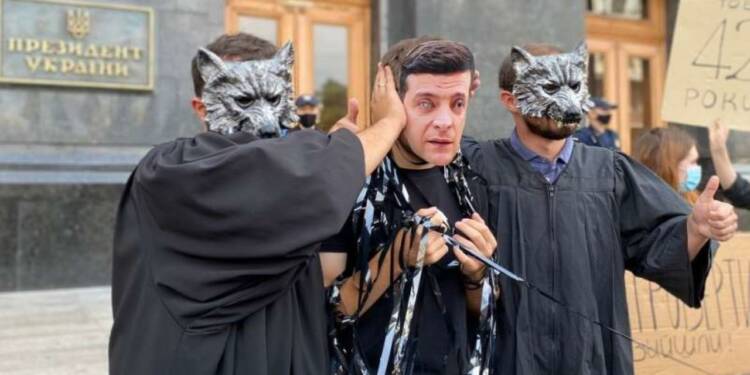 Which is the most corrupt country in the world? Have you ever given this a thought? Which country is plagued by corruption at the grassroots level, so much so that taking and handing out bribes is crucial to human existence? Here’s a hint – this is the same country that the Biden administration has given several billion dollars since March this year. Separately, this country is getting billions of dollars from other countries as well. That’s right! This country is Ukraine – currently being ravaged by war, but not compromising one bit when it comes to keeping corruption going.

Corruption is ingrained in Ukrainian society. The top echelons of Ukraine’s government are infested by corruption and crookery, while the common public too is forced to engage in such practices to benefit from the country’s flourishing shadow economy. With the war in Ukraine underway, the country’s corruption problem is only set to be exacerbated, with all anti-corruption gains being made in the past few years being reversed.

How Corrupt is Ukraine?

Transparency International’s Corruption Perceptions Index of 2019 ranks Ukraine 120th out of 182 countries, making it the second most corrupt country in Europe. A Freedom House survey from the same year assessed the level of corruption in Ukraine as only slightly better than at the height of the presidency of Viktor Yanukovych, who was toppled out of office during the Maidan Revolution.

Since the revolution, some steps have been taken to counter corruption in Ukraine. These were half-hearted measures meant to insulate the government and indict all others for corruption. Ukraine’s Institute of Economic Research and Policy Consulting anticipated in 2019 that the reforms helped reduce national corruption by a staggering $6 billion per year. If the alleged reduction was so large, one can only imagine how pervasive the menace is in Ukraine.

The West is giving Ukraine several billion dollars. In March, the U.S. Congress authorized $13.6 billion in aid to the Eastern European country. This aid was supposed to go toward strengthening Ukraine’s security and economy, food assistance, healthcare, and emergency assistance to refugees, as well as weapons.

Now, the Biden administration has decided to ‘help’ Ukraine with another $40 billion, at a time when living costs in the United States have soared, inflation is skyrocketing and there is an essential supply constraint across the country.

Added with the billions of dollars being given to Ukraine by other countries in the West, it would not be an overstatement to say that Kyiv is witnessing an unprecedented cash windfall.

Yet, just as is the fate of Western weapons in Ukraine – which get destroyed by Russia upon arrival, so is the luck of Western cash in the country. It evaporates into thin air as soon as it enters Ukraine.

According to the Centre for Research on Globalisation, much of the $53.7 billion that the United States plans to give Ukraine will be stolen in corruption schemes orchestrated by Ukraine’s military, oligarchs, and government officials.

On a side note, Ukrainian President Volodymyr Zelensky’s net worth is about $30 million. He and his inner circle also have their own network of offshore companies. These have in the past been used to buy expensive properties in London. The documents also show that just before he was elected, he gifted his stake in a key offshore company, the British Virgin Islands-registered Maltex Multicapital Corp., to his business partner, who would go on to be appointed as Zelenksy’s top presidential aide.

According to the Panama Papers, despite giving up his shares, an arrangement was soon made that would allow the offshore company to keep paying dividends to a company that now belongs to Zelensky’s wife. Convenient, right?

Corruption is just one problem. There is also a higher risk involved. With so much cash flooding Ukraine, there is a real chance that the money will find its way into the hands of neo-Nazi groups, who could use the funds to become a major security risk for the region.

Amidst the war, Ukraine’s corruption problem will only snowball into an all-out catastrophe. All gains made against corruption will be undone, and the country will once again turn into an even worse hell-hole of corruption.