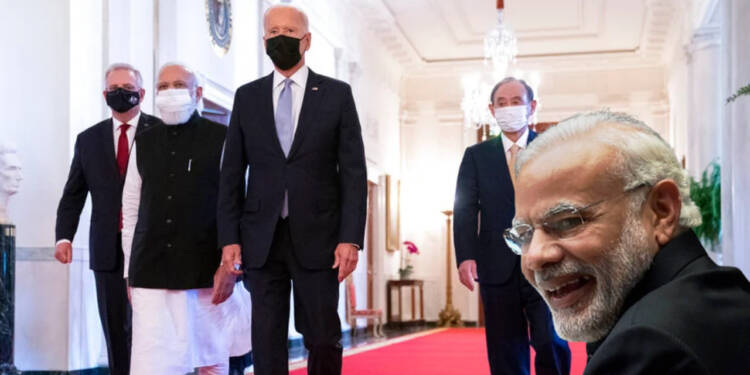 Japan says NO to AUKUS

After the Quad summit in Tokyo, Kishida told a group of reporters, “AUKUS is of great importance for stability and peace in the region. Our country supports it. Our country is not currently thinking about joining AUKUS. Australia, the UK, the US are important security and defense partners. We will strengthen cooperation with these countries in various forms and will continue to promote it.”

In April, it was first reported in media of Japan that US and UK were planning to extend an invitation to Tokyo for joining the AUKUS pact. However, this was heavily criticized by security and foreign policy experts in Japan. Moreover, it looked like the US wanted to build a parallel Quad in the Indo-Pacific, by effectively replacing India with the UK.

Make no mistake, India’s reluctance to join the West’s anti-Russia campaign has roiled the Biden administration. Some so-called foreign policy experts have also demanded India to be expelled from Quad. For instance, on April 26, a Hong Kong-based news pamphlet Asia Times published a report with this headline: South Korea emerges as Quad alternative to India.

In April, it was reported by TFI Global how a covert campaign was underway in Washington DC to undermine India and Quad with the help of NATO. Speaking at the G7 summit held in March, NATO Secretary-General Jens Stoltenberg had said without mentioning India or Indo, “the bloc would work more closely with Asia-Pacific partners”, which include “Japan as well as South Korea and Australia.”

Read More: NATO attempts to undermine India and Quad in the Indo-Pacific

Sadly, even Kishida got played into Biden’s hands and merrily invited NATO to the Indo-Pacific region. Japan, for the very first time, had sent its official to a NATO summit, where “Asia Pacific” term was repeatedly used in the security deliberations. All in all, Biden and company run a secret campaign to use the AUKUS alliance and NATO to undermine the original Quad and thus effectively cut India’s role in Indo-Pacific down to size.

Kishida comes back to senses

But, now Kishida’s refusal to join the AUKUS pact has come as a significant setback for the 79-year-old US leader. Kishida has sent a signal that he won’t let Biden undermine the Quad security alliance using Japan, a nation that devised this grouping. Kishida, who once appeared to be following Biden’s footsteps in undermining India, is now coming back to his senses. And interestingly, some political factors are at play here.

Modi-Abe meeting that upended the situation

On Tuesday, Indian Prime Minister Narendra Modi met with his old friends—The former Prime Ministers Shinzo Abe and Yoshihide Suga of the ruling Liberal Democratic Party (LDP). India’s News 18 media portal reported that “Suga, who served as Japan’s PM from September 2020 to September 2021, is part of a group of 15 Liberal Democratic Party lawmakers called the ‘Ganesha’ group, named after the Hindu god worshiped as a destroyer of obstacles.”

Suga and Abe were great leaders and shared friendly ties with the Indian Prime Minister. However, Kishida stands out as a disappointing aberration. During his time in office, he has incessantly attempted to harm Indo-Japan ties at Biden’s behest. However, for Abe, who currently chairs the largest faction of the ruling LDP, Kishida’s anti-India theatrics are intolerable. Without Abe’s political support, Kishida can’t remain seated in his PM chair for long. So, when India’s leader meets with his old friend in Tokyo, who also happens to be a larger-than-life figure in Japan’s politics, Fumio Kishida is bound to be alarmed and petrified. So, after months of flirting with danger and sleepwalking into Biden’s trap for undermining Quad, Kishida is finally changing his course.

To appease Putin, Germany rolls out the red carpet for Russian engineers and other skilled workers