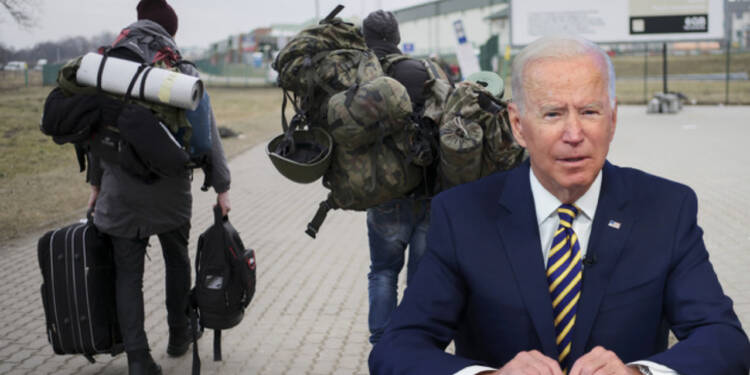 It has been 4 months now since the Russian-Ukraine began. The West was confident of sidelining Russia within the first 45 days of the war. But ever since, the city of Mariupol has been won by Russia, the West has become hesitant of declaring victory.

When the war started, many American civilians who had no damn knowledge of fighting or combatting the military went in thousands to Ukraine for fighting against Putin and Russia. The White House’s Justice Department didn’t care to clear the air if it was legal for Americans to join the Ukraine conflict or not.

But, now it’s labeling these civilians going to Ukraine as ‘White Supremacists’. Why? Because these Americans have participated in combat with Russian troops and have received training in the use and combat of firearms. But, why is it considering them as ‘white supremacists?’ Doesn’t the whole practice reeks of racism?

Customs and Border Protection at work

The U.S. officials quote that they are worried about domestic security issues due to the Russia- Ukraine war. So, the Department of Customs and Border Protection is now questioning Americans at airports as they travel to Ukraine to fight Russia.

Reportedly, the CBP bulletin said that they interrogated six unnamed Americans who traveled to Ukraine to fight. CBP officers stopped and questioned five of them at John F. Kennedy International Airport and searched luggage belonging to the sixth.

As per a retrieved document, The US government is gathering data on these Americans traveling to Ukraine and is interested in their activities once they return. Yes, they are focusing on “violent extremist-white supremacists,” mimicking one of the Kremlin’s main propaganda points: that supporting Ukraine also means supporting neo-Nazis.

In addition, the US believes that nationalist groups of Ukraine including the Azo[v] Movement are actively recruiting racially or ethnically motivated violent extremist-white supremacists (RMVE-WS) to join various neo-Nazi volunteer battalions in the war against Russia. The fighters who have gone can get influenced by the Azov battalion and they could return with greater military training. And once they return, they can start violence at home putting USA’s national security at risk.

Property of the People, a government watchdog group, obtained the document through open records request that revealed this information. Till now, none of the Americans that have returned have faced charges. But, this document shows that if law enforcement officials wanted to enforce charges, they have plenty of opportunities.

The US has no data or idea that how many people have traveled to Ukraine because of far-right views but they are tagging the travelers as ‘white supremacists.’ This is quite ironic because the white house itself was promoting this practice as it never cleared its position on whether Americans should travel or not to fight the war in Ukraine.

Read More: Europeans are now mincing no words in loathing Biden for starting the Russia-Ukraine war

This is more of a blame game by Joe Biden’s administration to avert the attention from the losing ground in Ukraine and NATO’s position in the war. We’ll explain how.

White supremacists is a term that is typically denoted to the voters of the Republican Party and are far-right ideologists. The White House knows what a terrible mess has been created inside Ukraine. Joe Biden thought Russia will be sidelined easily and its goal to isolate Putin internationally would be an easy task.

But, three months later the USA has come to terms that the plan didn’t work out according to its wishes. So, the softest targets have been pinpointed by Joe Biden to divert the attention. The clear message of these new tactics by the USA over its own citizens that got engaged in fighting is that the war is fueled not by the White House. But, Republicans themselves.

This indeed is a very notorious political move.

Putting blame on the white supremacists isn’t a new tactic. It has been noted many times how democrats have pushed the blame over this group without any solid proof.

Sending American civilians to Ukraine was never stopped by the USA. Indeed, it is a dumb move to send citizens to fight the military. But, it is dumber to blame them for a war that was broken out by your own silly mistakes.