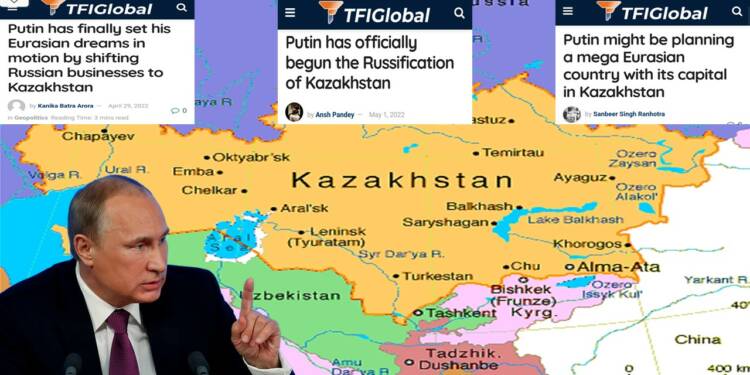 These days, every geopolitical news tends to startle the sap out of everyone.  But we here at TFI global have escaped such startling shocks or we are rather flattered by the fact that every cynical yet factful news that we opined about is truly walking the talk on the global stage.

This time, another of TFI’s prophetic words had shaped into reality in Kazakhstan. Nobody gave an exact take on the politics wiring up in the central Asian country, and so we did. Back in February, we spilled our skeptical nous into words with a prediction citing how Putin may plan a mega Eurasian country with Kazakhstan as its capital. Many cried hoaxes over the news and accused our news portal of piloting a disaster in the central Asian country. But the present-day happenings show that it was just plain ol’ truth. We stand vindicated.

“The Greater Eurasia megaproject deserves a detailed discussion. Sooner or later, we will implement it. And, as Russian President Vladimir Vladimirovich (Putin) said, it is possible that other countries can join,” Tokayev told the plenary session of the Eurasian Economic Forum being held in Bishkek, the capital of Kyrgyzstan.

In the February article, we started with how the Russian president had the portraits of peter the great hung in several important meetings of his. This ably sends the signs that with an idol like peter the great, Vladimir Putin is walking in the footsteps of Catherine the Great, who was the last reigning Empress of Russia from 1762 until 1796 —the country’s longest-ruling female leader. Catherine extended the Russian empire absorbing more land and thus revitalizing the long-lost culture that the Russian holds dear.

Read more: Putin might be planning a mega Eurasian country with its capital in Kazakhstan

Even though embroiled in the Ukraine war that is reaching its fag end with tacit approval of defeat pouring in from all quarters of Kyiv, Putin is not ready to call a stop until he tastes success with his long-held Eurasian dream. Putin adheres to an imperialistic approach when it comes to geopolitics. With every passing day, Kazakhstan is making certain that the greater Russian dream of Putin reaches success rather than just residing as a mere talking point.

Kazakhstan is a good friend of Moscow and has been rock solid in its support of Kremlin during the trying times of war. Putin has also played the spoilsport to China which saw through the myriad of options left within the central Asian country to explore. Taking count of the issue, Russia has piled up its businesses in Kazakhstan and Nur-Sultan has simply fused in right chords with Moscow, anguishing the Chinese interest.

So, gaining approval from the Kazakh president himself, Russia is sure to treat the geopolitical audience with the great dream of unification. The russification of Kazakhstan has begun, officially now.