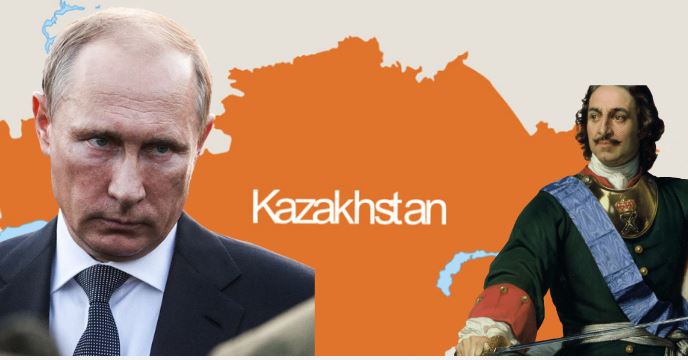 Under her reign, Russia grew larger, its culture was revitalised, and it was recognised as one of the great powers of Europe. The period of Catherine the Great’s rule, the Catherinian Era, is considered a Golden Age of Russia. During her reign, Catherine extended the borders of the Russian Empire some 520,000 square kilometres, absorbing New Russia, Crimea, Northern Caucasus, Right-bank Ukraine, Belarus, Lithuania, and Courland at the expense, mainly, of two powers—the Ottoman Empire and the Polish–Lithuanian Commonwealth.

The Emergence of a Great Eurasian Power

Russia has amassed over 100,000 troops on the borders of Ukraine. Moscow’s forces continue to land in Belarus, officially for a “military exercise”, but anyone in their right state of mind would know that the deployments being made to Belarus are disproportionately more than those required for mere war games. Indeed, Ukraine is being encircled. Russia’s naval forces have arrived in the Black Sea as well.

Many people think Vladimir Putin is reconstructing the erstwhile Soviet Union. They are wrong. Russia has long moved ahead of such petty ideals, and Vladimir Putin is not a man who wants to learn his lessons from the erstwhile Soviet Union. Of course, he respects the magnanimity of the USSR, but being a traditionalist, Putin has more of an imperial approach to geopolitics.

Which is why he is looking not to consume Eurasia, but make a separate, consolidated and powerful country in the region. Vladimir Putin is drawing continuous inspiration from great Russian tsars, who expanded the imperial Russian empire across Eastern Europe and Central Asia.

Of course, Ukraine is one of the targets for Putin. But so are other countries and entire regions. Central Asia forms the largest chunk of Putin’s imperial plans. Parts of Manchuria figure in the Eurasian country Putin is trying to build as well. There is Eastern Europe, with countries like Ukraine, Belarus, Lithuania and Latvia that is being eyed by Putin. Vladimir Putin seems convinced that Russia’s interests will be best protected if territory up till Kaliningrad, which borders northern Poland, is under the proxy control of Moscow.

Adjacent to the Black Sea, Georgia and Armenia are on Putin’s to-win list as well. Interestingly, Armenia and Russia have a lot in common, most notably their following of the Orthodox Christian way of life. The linkages between Russia and Armenia are not newfound. They date back several centuries, and ties between the two reached their zenith after the reign of Catherine the Great. In fact, Eastern Armenia became part of the Russian Empire following Qajar Iran’s loss in the Russo-Persian War (1826–1828) and remained under the Russian empire until its collapse in 1917.

Vladimir Putin wants to establish control over the Black and Caspian Seas, which is why Georgia, Armenia, Azerbaijan and even Turkey are being eyed by him. It was not in isolation that Moscow subtly staked claim last year on Turkey’s eastern provinces like Ararat and Kars.

Putin wants to herald unification among the Slavic people. His annexation of Crimea in 2014 was largely bloodless due to the fact that Crimeans wanted to become a part of Russia themselves. The divide among the Slavs is not ethnic or cultural; rather, it is political in nature. Ukraine and all other former Soviet states have a common thread linking them to the Russian federation. However, many such states identify themselves as different and look up to Europe and the United States instead of Moscow.

Kazakhstan to be Centre of the New Eurasian Giant

Let’s be frank, at this moment, Russia is just too big. It is overstretched, and its resources are limited. It could wage wars on all countries listed above, but the costs for Moscow would be immeasurable. And then, Russia would have to play the role of an occupational force – which means the people in the occupied regions would be hostile to Moscow. There would be widespread rebellions and uprisings against direct Russian rule.

So, Vladimir Putin could very well play a role in bringing all the said countries – from Poland in the North to Armenia in the South, and Kazakhstan in the East to Slovakia and Ukraine in the West – under one umbrella.  This is the ‘Great Eurasian Country’ I am talking about. It will be a de facto Russian vassal state and will serve Moscow’s interests, while also radically altering the geopolitical equations for Europe as a whole and for NATO in particular.

Kazakhstan is already among the most loyal Central Asian states, that remains committed to Moscow. So, it makes sense for the new Eurasian country to have its capital in Kazakhstan, which would also help Putin’s hidden yet ultimate goal of countering China and containing its rise. Kazakhstan is also minerally gifted. Carving a separate country of such regions would serve many economic purposes for Russia, which direct relegation might not.

Vladimir Putin is a man who is not afraid to take risks. He rolled down his military to support a friend in Syria, and that friend – who we know as Bashar al-Assad was, therefore, able to bring a full-blown Western regime-change war to its knees. Today, Russia commands massive influence in the Arab world. Putin’s hold over Central Asia is stronger than ever. Russian peacekeeping troops are stationed in Nagorno Karabakh. Eastern Europe remains the only outlier, and Putin seems willing to use force to tilt the scales in his favour in this part of Eurasia.

History is on the side of Vladimir Putin. All these regions have previously been conquered by imperial Russia, and for a man looking to resuscitate the glory of that empire, everything seems to be justified. Putin is convinced and decisive, while the West is simply clueless. It is not united, and that makes Russia’s position even stronger.