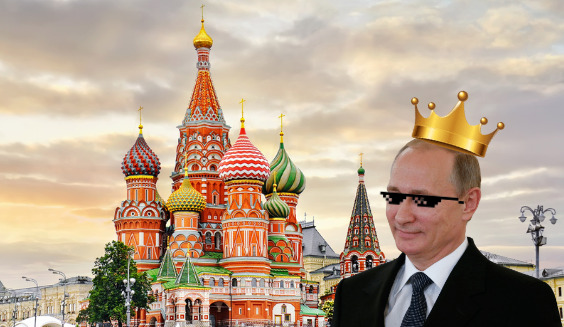 Russian President Vladimir Putin is his own man. Today, Russians can openly debate the drawbacks of Lenin and Stalin, and they will not be incarcerated by the Putin-led regime. Why is that? Because Vladimir Putin is not a Communist per se. He is more of imperial Russian czarist. Communism is not a sensation in Russia today. It was during the times of Lenin and Stalin and the Bolsheviks that submission to Communism meant death. Today, Russia has long moved ahead of such petty ideals, and Vladimir Putin is not a man who wants to learn his lessons from the erstwhile Soviet Union. Of course, he respects the magnanimity of the USSR, but being a traditionalist, Putin seems to have more of an imperial approach to politics.

Last week, after over a century, Russia’s descendants of the czarist Romanov dynasty, which was in power in 1613 held a traditional wedding with aristocrats flocking the ceremony at the dome of St. Isaac’s Cathedral in Russia’s former imperial capital city. Let’s just say, the event was the first in a very long time that brought to light the glory of imperial Russia – and many now seem enamoured by it. Even the food represented submission to the idea of nobility; and the catering was provided by ‘Putin’s chef’, Yevgeny Prigozhin.

The analysis of this grand show among international readers of Russian polity has been myopic, to say the least. They are harping on the bleak possibility of the Romanovs returning Russia to a monarchy, and are themselves saying that this is currently an impossibility. However, Russia already has an emperor, who is well on the path of Catherine the Great to restore the glory of imperial Russia. And his name is Vladimir Putin.

Catherine II, most commonly known as Catherine the Great, was the last reigning Empress of Russia from 1762 until 1796 – the country’s longest-ruling female leader. She came to power following a coup d’état that overthrew her husband, Peter III. Under her reign, Russia grew larger, its culture was revitalised, and it was recognised as one of the great powers of Europe.

The period of Catherine the Great’s rule, the Catherinian Era, is considered a Golden Age of Russia. During her reign, Catherine extended the borders of the Russian Empire some 520,000 square kilometres, absorbing New Russia, Crimea, Northern Caucasus, Right-bank Ukraine, Belarus, Lithuania, and Courland at the expense of, mainly, of two powers—the Ottoman Empire and the Polish–Lithuanian Commonwealth. Russia, under Catherine the Great, fought many wars with the Ottoman Empire, which is today known as Turkey, and defeated it in all of them. It also fought the Persian Empire, or what today constitutes Iran. The Russian victories procured access to the Black Sea and allowed Catherine’s empire to incorporate present-day southern Ukraine with itself.

The Treaty of Küçük Kaynarca, signed on 10 July 1774, gave the Russians territories at Azov, Kerch, Yenikale, Kinburn, and the small strip of Black Sea coast between the rivers Dnieper and Bug. Essentially, Catherine the Great worked wonders in establishing Russian control over warm ports, so as to exploit the global trade routes around the year.

According to the Smithsonian Magazine, Catherine’s victories enabled Russia to establish a Black Sea fleet. Special access to the Dardanelles and Bosporus Straits that connected the Black Sea to the Aegean Sea via the Sea of Marmara became a key foreign policy goal for Catherine’s descendants during the 19th century. Much like Putin today, Catherine valued her own sovereignty and the expansion of Russian political power over all other considerations.

House of Vladimir – A Monarchy in the Making?

Russian President Vladimir Putin is not stuck in Soviet times. He realises that the true potential of Russia cannot be realised under stringent Communist rule. To do so, he must revive Russian glory – the way it was done in the past. And Turkey figures prominently in this scheme. For now, Ankara might think that despite some differences, Russia is its friend. However, if Putin is to resuscitate imperial Russian glory, he will have to inevitably go against the interests of Turkey.

As reported by TFI recently, within Russia, there is a renewed vigour with which important figures are staking claim of Turkey’s eastern provinces. Recently, in a subtle but severe message to Turkey, the editor-in-chief of the Russian state TV channel RT said Russia should annex eastern Turkey’s Mount Ağrı (Ararat) and Kars province. According to the Daily Sabah, Simonyan’s controversial comments followed similar remarks by Russian politician and leader of the Liberal Democratic Party of Russia Vladimir Zhirinovsky, who claimed that a “special” tsar-like regime was necessary to secure Armenia.

Read more: Russia will follow the Israeli model in its quest to reunify the lost USSR

Interestingly, Armenia and Russia have a lot in common, most notably their following of the Orthodox Christian way of life. Turkey has a bruised past with Armenia. During World War I, the then Ottoman Empire committed cultural genocide against Armenians, in which no less than 1.5 million Armenians were killed. Most of these massacres took place in Eastern Turkey, which is the same region that Russia has begun eyeing for itself.

The linkages between Russia and Armenia are not newfound. They date back several centuries, and ties between the two reached their zenith after the reign of Catherine the Great. In fact, Eastern Armenia became part of the Russian Empire following Qajar Iran’s loss in the Russo-Persian War (1826–1828) and remained under the Russian empire until its collapse in 1917.

Now, Turkey is taking successive steps to hurt Armenia’s interests, and Russia is, needless to say, not liking Ankara’sbehaviour. Vladimir Putin is very touchy about former Russian territories, which over the past century, have slipped out of Moscow’s hands. However, with the annexation of Crimea in 2014, Putin started a campaign to revive the imperial age of Russia, and he is the best man suited to take the same to its logical conclusion.

Vladimir Putin is a man who is not afraid to take risks. He rolled down his military to support a friend in Syria, and that friend – who we know as Bashar al-Assad was, therefore, able to bring a full-blown Western regime-change war to its knees. Today, Russia commands massive influence in the Arab world. Putin’s hold over Central Asia is stronger than ever. When looked at carefully, in terms of influence, Putin has already achieved what Catherine the Great had during her reign.

Whether it be Turkey’s eastern provinces, Ukraine, Armenia, the Black Sea and former Soviet states– Vladimir Putin wants to dominate them all. He is following the geopolitical trajectory of Catherine the Great, and his campaign is yet to reach its zenith. He has taken Crimea, he wants to take Ukraine, he is signalling his intent to take parts of Turkey – Vladimir Putin is most certainly not letting a Soviet hangover get the better of him. What’s best for the Kremlin, he does not share the mindset of the Soviets and wants to take Russia straight back to the glory of its imperial past. By doing so, Putin is trying to carve an emperor-like image of himself, and might even declare himself so. With Putin, everything is always a possibility.