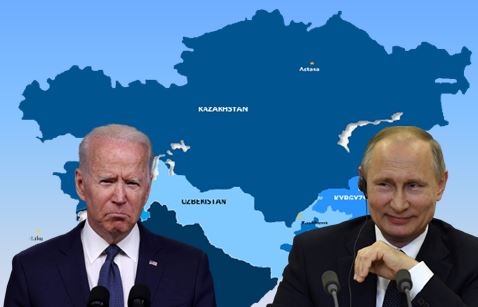 President of Russia Vladimir Putin is a true nationalist leader. He wants to make his country a superpower all over again. And amongst the biggest of Putin’s exploits have been his ability to reinvigorate Russian influence in Central Asia, a region of Moscow‘s privileged sphere of influence that had once warmed up completely to the United States of America.

With the abrupt US withdrawal from Afghanistan, Putin is now taking complete control of the Central Asian region and all of a sudden he has wrested Central Asia back from the US and turned it into a Russian backyard.

Soviet collapse and how the US won Central Asia

The growing American influence in Central Asia was, of course, triggered in the 1990s by the Soviet collapse. At that time, the Soviet Union had just got fragmented and the five Central Asian Republics had come into being.

The US had a major role to play in the Soviet collapse, and the dissociation of the Central Asian nations from the erstwhile USSR fractured their relationship with Moscow. Thereafter, the US further expanded its presence in the region in the aftermath of the 9/11 terror attack.

The US had waged a “war on terror” against the al-Qaeda in Afghanistan. In order to achieve its military objectives in the wartorn country of Afghanistan, the Pentagon decided to military basing, overflight, and logistics deals with countries like Uzbekistan and Kyrgyzstan.

Similarly, then President of Kyrgyzstan Askar Akayev had found his US relationship beneficial for securing international legitimacy.

How Russia bounced back

In the immediate aftermath of the 9/11 terror strike, US influence had shot up in Eurasia. However, Washington D.C.’s inherently interventionist character soon clashed with the regional governments in Central Asia. When the US got as invasive as condemning a crackdown by the Uzbek security forces in 2005. Thereafter, the Central Asian governments started growing skeptic of enhanced US presence in the region.

Meanwhile, Russia kept establishing closer security ties with Central Asia. The Russian-led Collective Security Treaty Organization (CSTO) expanded its role in the region. In 2006, Uzbekistan joined the CSTO, even as US-Uzbekistan ties deteriorated. In fact, Russia also established a military base in vicinity of the US military base in Manas, Kyrgyzstan. Moscow also secured an agreement with Tajikistan to station 5,000 of its troops in the country.

By the mid-2010s, Central Asian opinion grew completely hostile towards American presence. Ultimately, the last US troops withdrew from Kyrgyzstan in 2014, and Moscow became Kyrgyzstan’s biggest security provider. Uzbekistan and Tajikistan had already warmed up completely Moscow and the entire region seemed to embrace Russia all over again.

By the mid-2010s, Moscow had recovered from the effects of the post-Soviet collapse in Central Asia. The US influence in the region was also receding. China did try to eat into Russia’s sphere of influence by investing in Belt and Road projects in the region. However, when it came to playing the big brother and acting as the net security provider, Moscow was the only active power in the region.

However, the US still had some sort of a relationship with Central Asia because the American troops stationed in Afghanistan were fighting the Taliban. For Central Asian nations like Turkmenistan, Uzbekistan and Tajikistan that share borders with Northern territories of Afghanistan, US presence in Afghanistan did serve the purpose of avoiding a spillover of Taliban fighters into Central Asia.

Also read: Afghanistan conundrum: China part clueless and part scared to fill in the void left by a retreating America

Moreover, Kazakhstan and Kyrgyzstan, the two other Central Asian nations, believed that as long as US troops keep fighting the Taliban, they don’t have to worry about an Afghan refugee crisis in their territories.

However, the US withdrew from Afghanistan in the month of August this year and abruptly at that. The Biden administration left Afghanistan in state of political disorder and societal chaos. Consequently, an Afghan refugees crisis has hit Tajikistan and Uzbekistan. Central Asia as a whole is particularly worried about the possibility of Taliban fighters masquerading as refugees infiltrating into their territories.

Meanwhile, Russia has built on its security partnerships with Central Asia post the US withdrawal from Afghanistan. Suddenly, Russia is the main power in Central Asia all over again and the US, which had once developed really close ties with Central Asia, has got marginalised yet again.