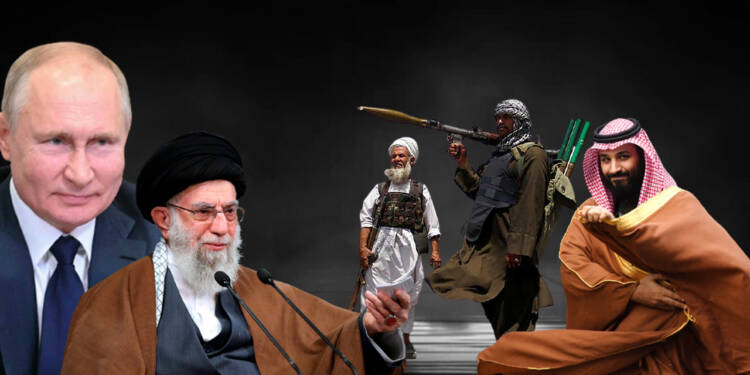 The US has abandoned Afghanistan and has literally handed over the wartorn country to the Taliban. So, Taliban’s enemies are now rushing to devise mechanisms for restricting the terror network and its activities.

Both Russia and Saudi Arabia want to push back against the Taliban. Russia fears a spillover of the Taliban militants into Central Asia and further into Russia itself. Saudi Arabia, on the other hand, has certain political priorities like slowly veering away from religious fundamentalism and strengthening its alliance with the US. Such political priorities don’t align with the Taliban. Therefore, both Riyadh and Moscow find it convenient to tame the Afghanistan-based terror network by positioning Iran against it.

As for Iran, the Shi’ite country has historically never had good, amiable or friendly ties with the Taliban. There is a clear divide between Tehran and the Taliban. While Iran is led by a Shia clergy, Taliban is a fundamentalist Sunni organisation. In fact, Taliban has a long history of killing Hazaras and other Shia minorities in Afghanistan.

When Taliban had overrun Afghanistan in the 1990s, Tehran had opposed it fiercely. However, this time around, there is an ambiguity in Iran. Last year, Vinay Kaura, a non-resident fellow at the Washington-based think tank The Middle East Institute said, “There have been many reports of tactical understandings between Tehran and the Taliban”.

However, pro-reform Iranians – who have come to form a significant portion of the population in Iran are not liking Khamenei’s plan to get in bed with the Taliban. So, they are pushing Tehran to take on the Taliban.

Anyhow, Iran did crack down on fuel supplies to Afghanistan last month after the Taliban takeover. This has led to a surge in gasoline prices in the wartorn country, which threatens to instigate a civil uprising against the Taliban.

Moreover, it was also reported that Tehran could be mobilizing the Fatemiyoun brigade, an Iran-backed militant organisation consisting of Shia Afghan refugees in Iran and members of the Hazara Shia minority inside Afghanistan, to avert any security threat posed by a Taliban-ruled Afghanistan.

So, how can Russia and Saudi Arabia use Iran against the Taliban? Well, Moscow is being quite straightforward in its approach. The Russian Defence Ministry has announced it would hold naval drills in the Caspian Sea with small missile and artillery ships from Iran, Azerbaijan and Kazakhstan this month.

Now, Russia seems to be involving Iran in its broader Afghanistan strategy. Moscow’s plan is to surround the Taliban-ruled Afghanistan from all sides by collaborating and coordinating with every one of Afghanistan’s neighbours, except Pakistan and China. This helps Russian President Vladimir Putin in achieving his primary objective of threatening the Taliban in case he feels that that Taliban is trying to harm Russia.

On the other hand, Saudi Arabia has reasons of its own behind instigating Tehran against the Taliban. Saudi Arabia had supported the Taliban when it came to power in 1996. However, Riyadh-Taliban ties got frayed in 1998 itself after Taliban refused to extradite Osama bin Laden, who was a Saudi citizen.

Semi-official Iranian news agency ISNA quoted Iraj Masjedi, Iran’s Ambassador to Iraq as saying, “We have had three rounds of negotiations with the Saudi side, and the fourth round is to be held after the formation of a new Iranian government.”

Iranian Foreign Minister Hossein Amirabdollahian too confirmed the development. He disclosed, “The Saudi counterpart said we’re waiting for the new government in Iran to be situated and we will resume our communications.”

Riyadh wants to start communicating with Iran as soon as the Raisi cabinet is formed. Actually, Saudi Arabia understands that Iran is at a crossroads on the question of opposing Taliban. So, it is imperative for the Sunni Kingdom to abet Iran against the Taliban as soon as possible.

Russia and Saudi Arabia are thus playing their part in surrounding the Taliban-ruled Afghanistan from all sides and taming the regional threat posed by the extremist organisation.