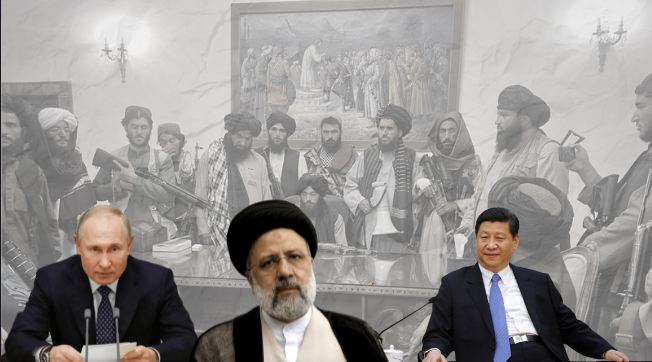 Afghanistan has gone to the dogs, with the Taliban once again taking control of the war-torn country. What now? What will be the future of Afghanistan? This is what everyone wants to know. To be fair, with the US leaving behind a lot of vacuum, much depends on the position that Iran will take. Geographically bordering Afghanistan, Iran can either push back against the Taliban and marginalise it, or it can mainstream and legitimise it.

However, there is not much clarity about the position that Iran will take. Actually, Tehran is itself at crossroads in terms of its foreign policy. Traditionally, Russia and Iran were good allies. However, of late, Tehran has drifted away from Russia and has warmed up to China. Iran is doing this because its trade relations, especially in terms of Iranian oil, align more closely with those of China.

China has been looking to influence Iran’s foreign policy by throwing billions of dollars at the Shi’ite nation. Beijing recently agreed to spend a whopping $400 billion in Iran as a part of a 25-year cooperation agreement with Iran. Within Beijing, there is a strong expectation that closer ties with Iran will compel the Shi’ite nation to align its policies with China’s interests.

On the other hand, the US, of course, has zero chances of making friends with Iran or coordinating a strategy in the context of the Taliban’s takeover of Afghanistan. So, Russia and China are the only ones trying to compete for influence in Iran.

China’s interests, of course, lie in legitimizing and mainstreaming the Taliban. Beijing is making a huge gamble by placing its bets on the militant organisation. Be that as it may, China wants to recognise the Taliban and it also wants Iran to do the same. Indeed, Iran’s first instinct after the US troops pullout and the Taliban’s resurgence was to celebrate the so-called American surrender.

Iranian Supreme Leader Ayatollah Ali Khamenei has tried to cultivate good ties with some Taliban factions and has also softened his stance towards the Sunni-fundamentalist group. Some Iranian hardliners associated with Supreme Leader Ayatollah Ali Khamenei and President Ebrahim Raisi have tried to paint the picture of a ‘changed Taliban’, which is supposedly not as brutal as the one that took over Afghanistan in 1996.

In June, an ultraconservative newspaper affiliated with Khamenei said, “The Taliban today is different from the Taliban that beheaded people.” Hessam Razavi, the foreign news editor at the hard-line Tasnim News Agency, which is closely tied to the Islamic Revolutionary Guard Corps (IRGC) said that there was “no war between Shiites and the Taliban in Afghanistan.”

Yet, many in Iran cannot lose sight of the fundamental difference between the Shi’ite nation and the Taliban. Iran is ruled by the Shi’ite clergy, whereas the Taliban is a terror network with a long history of killing Hazaras and other Shia minorities in Afghanistan.

Ali Khorram, a former Iranian diplomat, said, “Thinking that the Taliban will come under Tehran’s command is tantamount to growing a snake up your sleeve. As far as Iran’s national interests are concerned, the liberal government of Ashraf Ghani is a hundred times better than a radical ISIS-Taliban government.”

Moreover, pro-reform Iranians, who have come to form a significant portion of Iran’s population are not liking Khamenei’s plan to get into bed with the Taliban. So, they are speaking out. On the pro-reform Fararu website, former diplomat Fereidoun Majlesi said, “the attacks on various Afghan provinces (by Taliban) are part of a conspiracy against Iran.”

In fact, Jomhouri Eslami, which was funded by Ali Khamenei following the 1979 Islamic Revolution, has made a case for Shia militias rising in Afghanistan to fight the Taliban. So, there are people in Iran who are not letting the country forget the Shia-Sunni divide, which actually forms the basis of most of Tehran’s foreign policies. They are reminding Iranians how the Taliban hunts down Shia minorities and will eventually continue to do so.

Taliban, on the other hand, wants to bring Iran on board because it understands that Tehran’s consent will help it in getting mainstreamed. Taliban has been meeting and lobbying with Iranian leaders for the past several months now. It is the Taliban, which is trying to show that it is not really averse to religious minorities and isn’t as brutal as it used to be.

However, Iran should not buy what the extremist group has to say. At the end of the day, Taliban is no Hamas. While Iran might rely upon Hamas, which has at least some trappings of a political organisation, Taliban is a pure terror network with no political credibility.

Iran is faced with two choices- accept Taliban for China’s sake and let it get mainstreamed, or oppose it and normalise the situation to some extent in Afghanistan. If Iran chooses to push back against the Taliban, both Pakistan and China would be at a disadvantage and Tehran itself would end up getting somewhat closer to Russia.

Recently, Iran went as far as saying that it welcomes India’s security role in Afghanistan. Russia too has communicated that it is interested in involving India and Iran to bring peace in Afghanistan. So, a trilateral involving New Delhi, Tehran and Moscow to push back against Taliban isn’t too remote a possibility.

Russia is already looking to build the International North-South Transport Corridor (INSTC) that would link Russia’s Moscow to India’s Mumbai with a network of ships, roads and railways. It would pass through India, Iran, Afghanistan, Azerbaijan, Central Asia, Russia and Europe. This project will give Iran and the Chabahar port in the Shi’ite nation a central role, practically bypassing the Belt and Road Initiative (BRI).

Iran is clearly faced with two very different choices vis-a-vis Afghanistan. If it goes with India and Russia, there will be a strategic pushback against the Taliban. However, if Iran chooses China and the Taliban, the situation could deteriorate terribly in Afghanistan.