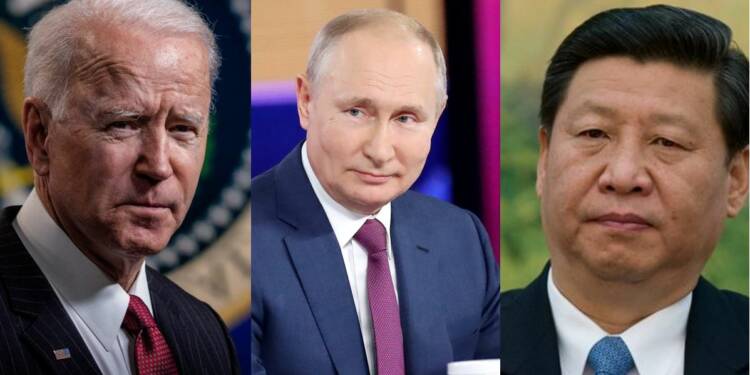 With the US receding in the Middle East due to President Joe Biden’s frequent blunders and China scrambling to usurp the strategically crucial region, Putin’s Russia is looking to foil China’s plans of building its presence in the region. Russia is strategically addressing the concerns of the two major powers in the region- the Arabs and Israel, in a bid to ensure that Washington is substituted by Moscow and not Beijing.

The US has lost the Middle East

For several decades, the US has remained the main power in the Middle East. However, Biden’s blunders are now reducing its influence in the region. American allies like Saudi Arabia and Israel are miffed with the US for many reasons.

If Saudi Arabia and Israel no longer feel comfortable with the US, it is Biden who is to be blamed.

China is really used to doing this- whenever and wherever the US loses influence, Xi Jinping tries to fill in the vacuum.

Moscow has however not let China take complete control of the Middle East. It has interacted with both the Arabs and Israel, as a part of its efforts to ramp up its own influence in the region.

The Arab world has intensified its engagements with Russia in the recent past. Last month, Saudi Arabia and Russia signed an agreement to develop joint military cooperation between the two countries.

In Moscow, Saudi Arabia’s Deputy Defence Minister Prince Khalid Bin Salman said, “We discussed our common endeavour to preserve stability and security in the region, and reviewed shared challenges facing our countries.” The Saudi Defence minister had earlier met with his Russian counterpart, Sergey Shoygu to “explore ways to strengthen the military and defense cooperation” between the two countries.

On the other hand, Israel’s Foreign Minister Yair Lapid too visited Moscow and addressed a joint press conference with his Russian counterpart, Lavrov. Lapid said, “Iran’s march towards a nuclear weapon is not only an Israeli problem, it’s a problem for the entire world.” Israel’s Foreign Minister added, “A nuclear Iran will lead to a nuclear arms race in the Middle East.”

Lapid also warned, “The world needs to stop Iran from getting a nuclear capability, no matter the price,” and “if the world doesn’t do it, Israel reserves the right to act.”

Why Israel and the Arabs are likely to choose Russia over China:

Both Israel and the Arabs have sought to enhance their security cooperation with Moscow and not Beijing. They seem more comfortable discussing their concerns with Russia.

On Wednesday, Deputy Foreign Minister Sergey Ryabkov told TASS, “We are definitely concerned about the rapid progress that is being observed in Iran’s nuclear capabilities.”

Last month, Russia had even issued a subtle warning to the Shi’ite nation. A photograph was posted on the Russian Embassy’s Twitter handle recalling the 1943 Tehran Conference when Iran used to be under the occupation of the Allied powers. The picture had triggered a meltdown in Iran with former Foreign Minister Mohammad Javad Zarif calling it “extremely inappropriate”. Iranians felt as if they are being reminded by Russia about the history of foreign occupation.

Russia and Iran are old partners, but unlike China, Moscow doesn’t use Iran to bully others. China has actually chosen Iran over Israel and Arabs several times, especially after signing an agreement to spend a whopping $400 billion in Iran over the next 25 years. Even during the Gaza hostilities earlier this year, Beijing had supported Hamas instead of speaking in favour of  Israel’s right to self-defence.

Therefore, both the Arabs and Israel feel more comfortable in dealing with Russia, as compared to dealing with China. Putin is therefore dashing Xi’s hopes of dominating the Middle East.