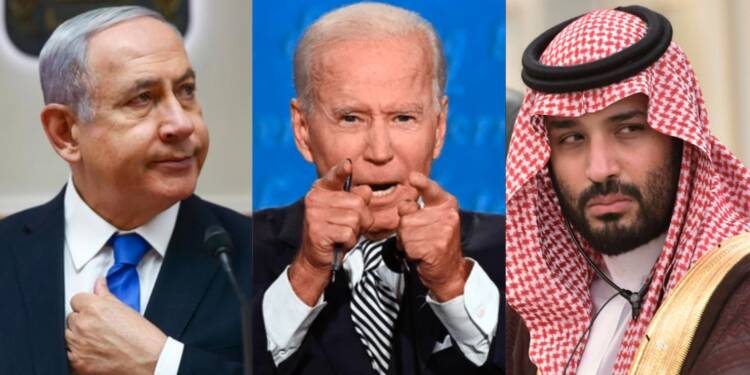 Joe Biden has made it clear to all that he intends to rejoin the agreement with Iran. Ever since he was sworn in as the US President and even before that, he made no secret of his Middle East policy and as a result, staunch US allies Saudi Arabia and Israel have suffered. Such has been the impact of Biden’s Middle Eastern policies that the US is now refusing to acknowledge them as ‘important’ allies.

During a regular press briefing, White House press secretary was asked whether the Biden administration considers Saudi Arabia and Israel to be “important allies.” It was a simple question, and given the importance of these states in the Middle East, the answer should have been simple and direct. But Jen Psaki presented a vague and rambling answer.

Unconvinced at Psaki’s earlier answer a reporter further asked, “Can you please just give us a broad sense of what the administration is trying to achieve in the Middle East?” “For example,” the reporter asked, “does the administration still consider the Saudis and the Israelis important allies?

Rather than providing them with a simple answer, Psaki said, “Well, you know, again, I think we — there are ongoing processes and internal interagency processes — one that we, I think, confirmed an interagency meeting just last week — to discuss a range of issues in the Middle East.”

“We’re — we’ve only been here three and a half weeks, and I think I’m going to let those policy processes see themselves through before we give, kind of, a complete laydown of what our national security approaches will be to a range of issues,” she added, “It is just a reflection of the fact that we have been here three and a half weeks, he’s not called every single global leader yet, and he is eager to do that in the weeks ahead.”

Still not convinced, a reporter followed up again, “But he has called every other major ally in Europe and Asia,” to which Psaki answered, “He’s called many of them.”

In her reply, as vague she can be, Psaki added, “That is true,” she continued, “Some would argue they haven’t received calls yet, and they are still eager to receive them.”

“But I can assure you he will be speaking with the prime minister soon, and he’s looking forward to doing that,” she said.

It’s true, President Biden has not been in the office for long, but during that period he found time to sign ’42 executive orders’ in his first week. Some of it rather unnecessary too, but he hasn’t had the time to speak to US’s greatest ally in the Middle East.

During the same period, Biden has showered gifts on Iran at the expense of Saudi Arabia, UAE and Israel. The US has pulled out of the war in Yemen and has left Saudi Arabia to fend for alone.

Furthermore, the Biden administration has lifted sanctions on the Houthi rebels which were imposed during the Trump administration, thereby giving added cushion to Iran to pursue its geopolitical goals.

Moreover, the Biden administration has also decided to stop the arms export to the KSA, UAE, and other Arab allies of America. These weapons were being used to fight the Houthis and a sudden din in the arms supply would give rebels the upper hand which in turn will bolster Iran.

Besides, Israel which had become a much closer ally for Donald Trump during his four-year tenure as the President is seemingly drifting away from Washington.

The reason being, Joe Biden’s restoration of aid to the pro-Palestine groups which are bound to anger Israeli PM, Benjamin Netanyahu. Biden is also a big proponent of the two-state solution to the Israeli-Palestinian conflict which certainly is not a favourable message for Israel. And also, Biden is yet to have a telephonic conversation with the Israeli PM.

Under Trump, the Middle East had started coming together with Israel actively engaging in the conversation. The Abraham Accords between Israel and several Arab states were a milestone that was seen as a precursor to peace and stability in the region.

But it seems that Biden’s idea for peace is seemingly different from the countries which exist in the region. Biden’s willingness to renew the Joint Comprehensive Plan of Action (JCPOA), will have certainly angered the states in the Middle East.

States which had come together under President Trump’s leadership like Saudi Arabia, UAE and Israel, are on the brink of returning to hostilities again. The latest show of non-commitment to US allies can cost the Biden administration US’s biggest support in the Middle East.