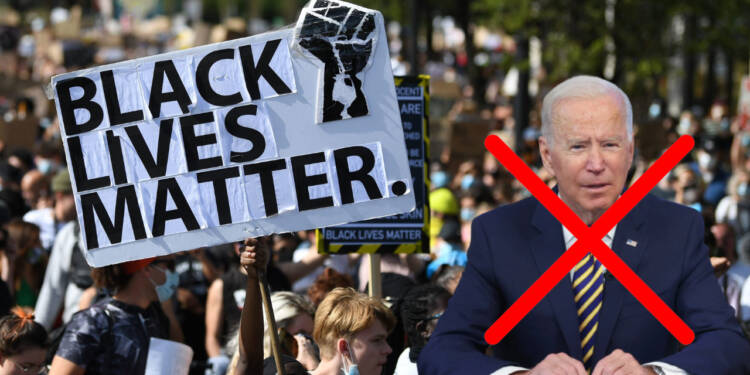 The Democratic Party, Joe Biden, and Black Lives Matter activists have been in close relations for a long time. In 2020, after the murder of George Floyd, Democrats and Joe Biden went all guns blazing against Donald Trump and the police for his murder.

Floyd’s death ignited a national movement against racial injustice and dramatically shifted long-held views on racism and policing. This is already undeniable that Democrats won Presidency on the back of sympathizing with BLM and Black Voters.

Joe Biden often stated following his election that he would put an end to so-called police racism. However, for Democrats, who control both chambers of Congress by a razor-thin margin, moving the BLM agenda into a legislative action has proven difficult.

Now, BLM activists have been agitated by Joe Biden’s recent actions. Despite the fact that they once again have made another ridiculous demand, it is almost likely that BLM will soon stop supporting Democrats.

The Executive Order also calls for a new national standard for accrediting police departments, as well as a national database to track police misconduct, the restriction of military equipment being transferred to police departments, and the implementation of new tools to screen for inherent bias among officers and recruits, including those who promote unlawful violence or hold white supremacist views.

Democrats believe that this is one of the “most significant police reforms in decades”. But, guess what, BLM is not at all appeased by this new Executive Order and they have tagged Biden as a supporter of ‘White Supremacist’

The frustrated BLM tweeted,  “Maintaining a white supremacist institution like policing costs Black lives. This continued commitment by politicians to support our killers makes them accessories to our demise.”

Maintaining a white supremacist institution like policing costs Black lives. This continued commitment by politicians to support our killers makes them accessories to our demise.

Furthermore, it added, “Politicians have been protecting systems of policing as if it could magically abandon its roots of slave patrolling and anti-Black violence,” it said in another tweet. “Banning chokeholds and requiring body cameras doesn’t keep us safe. More money for ‘training’ doesn’t keep us safe.”

According to this far-left movement, the only solution is to literally eliminate policing. They don’t care if there is law and order in the country or not. They do not want the situation to be brought under control by the police.

Read More: Ad campaigns worth millions only to trick blacks into believing that Biden is one of them

Biden and BLM over the years

When BLM was at its peak due to George Floyd’s killing, Joe Biden had described the killing as an “act of brutality” and took out a whole campaign targeting Donald Trump as a white supremacist.

When Biden won, there were pockets of spontaneous celebrations that erupted across the country from New York City to Los Angeles, California, there were car horns, cheers, and dancing in the streets by Blacks and BLM Sympathizers.

Even before Joe Biden was president, Democrats and Blacks have shared common grounds when it comes to the agenda of the BLM. But ever since Biden’s swearing-in, he hasn’t been as vocal an opponent of racism, as he used to be, earlier.

BLM and its supporters leaving the Democratic Party ahead of the crucial midterms could be devastating for the party. Now, how will Biden reclaim the lost ground, is up to him.

The White House officials said the executive order was finalized after more than 100 hours’ work and as many meetings with stakeholders including law enforcement officials, lawmakers, civil rights and civil liberties groups, and families of victims of police violence.

BLM wants to eliminate police forces from the United States because they feel it is the only solution that will work. And unless Joe Biden and the Democrats stick to their plan, they won’t get any political support from the Black Lives Matter faction.