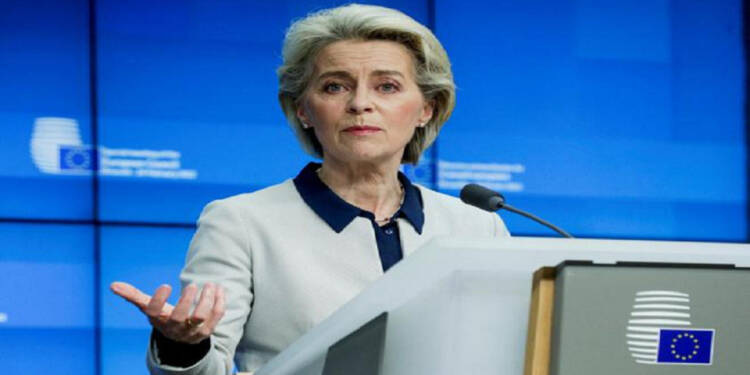 The European Union has been trying its best to somehow implement the 6th sanction package over Russia as the Bloc tries to completely inch away from Russian Oil and Gas. For this, the EU was trying its best to convince Hungary for the ban.

Although it has been noted many times that Europe is still buying Russian Gas and Oil and bending to the Russian demand for the Ruble payment system. Now, on the failure of implementing an embargo, the European Union Chief Ursula von der Leyen has given a hilarious remark.

The remark can be seen as a major U-turn over the ban on Russian oil. The EU chief has stated that it would be wiser to continue imports from Russia in a bid to hurt it.

The European Union Chief has claimed that by continuing to buy Russian oil, the EU would cause more harm to Russia than an embargo. Yes, you read that right and this was on the US TV channel MSNBC.

Ursula von der Leyen furthermore added, “What we always have to do is strike the correct balance between not harming our economy too much,” she continued, “because this is the biggest leverage we have against this Russian aggression, [President Vladimir] Putin’s aggressiveness. We’re buying oil from Russia so that they don’t sell it for a higher price elsewhere”

The EU chief believes that the EU must think strategically about how it addresses the issue of Russian oil. She had earlier stated that she would be completely cut off by the end of the year. However, the dream is shattered because of Hungary’s veto.

But, Ursula’s excuse for buying the Russian oil is both funny and dumb at the same time. She is arguing that Russia may sell to other countries in order to recoup its war losses. but, Russia is doing the exact opposite. It is selling oil at a significant discount to other countries, such as China and India.

Moreover, nations like India want to continue buying “cheap oil” from Russia but have not finalized the terms of the discount. So, how come Ursula von der Leyen can claim such a great farce on Television.

Read More: The Ukraine war is slowly but surely debt-trapping the EU as Germany presses the panic button

Why is Ursula von der Leyen still the EU Chief?

Well, we are surprised that despite the blunders in the last 4 months, Ursula Von Der Leyen continues to serve as the Chief of the European Union. Not a single unanimous decision has been made possible under her tenure.

Her decision along with the big guns of the EU i.e. Italy, Germany, and France has made the whole EU suffer. Though they support the ban, isn’t it a fact that Italy’s economy is sliding into recession and a total ban on Russian oil will cost 500,000 jobs. Germany also states it is braced for similar losses in the event of such an embargo.

But, another side of the story is that these nations are continuously cushioning themselves by sneakily buying Russian Oil. Italy PM Mario Draghi has already stated, that the whole of Europe is doing it and almost everyone has opened a Gazprom account for Ruble Payment.

During her tenure, the blind following of NATO has led the whole of the Bloc in a rush for food also. In addition, Cost-of-living is high, inflation is skyrocketing and whatnot. But, the EU chief has no specific solution for the problems.

Ursula’s words have enough power to tell you about the current status of European nations. The EU Bloc has succumbed to the western propaganda, and its main mission of defending Ukraine is not delivering much. The leader has no exact reason for the embargo right now, but still, she wants to do it.

With the Euro falling in value, no one knows how long the Bloc will allow Ursula von der Leyen to remain as its leader.