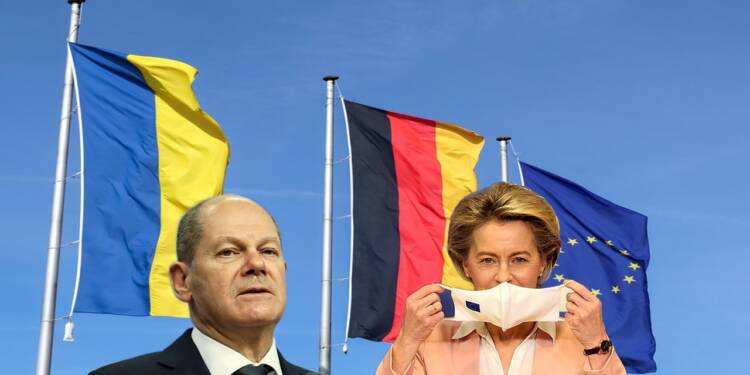 The Ukraine war seems to be in a deadlock. Russian forces keep making progress but we are looking at a prolonged war that could continue for several months or even years.

Meanwhile, in Berlin, the war has triggered panic and fear. The German government fears that the ongoing war could lead to the EU getting debt-trapped. So, how bad is the EU’s situation and why is Germany fearing a debt trap? Let’s find out.

EU reaching its limits with sanctions against Russia

Within the EU, the growing sentiment is that it has gone way too far with the sanctions against Russia and is now running out of steam on this front.

An EU diplomat told EURACTIV, “The 7th package of sanctions against Moscow will be extremely difficult. We are very close to reaching our limits. What will the 7th package include?”

The diplomat said that during the foreign affairs meeting last week, there was some progress in talks with Hungary on the subject of lifting its veto for an embargo on Russian oil. However, he added that the atmosphere suggested that “we even took a step back”.

The diplomat wondered, “If there was such a mess with Russia’s oil, imagine what would happen with a proposal to ban gas”.

Last week, the European Commission lowered the growth forecast for the eurozone in 2022 by 1.3 points to 2.7%. On the other hand, inflation seems to be going up dramatically and its forecast has been hiked by 3.5 points to 6.1%. For the whole of the European Union, inflation is forecast to hit 6.8%.

Paolo Gentiloni, Commissioner for Economy, has described the revised growth forecast as “one of the steepest” ever cuts between forecasts.

The EU is feeling the pain of the Ukraine war. Already expensive fossil fuel has become even more expensive due to the Ukraine invasion. The war has also created supply chain issues for the EU which further seems to pull back its growth numbers.

European Commission Vice-President Valdis Dombrovskis said, “There is no doubt that the EU economy is going through a difficult period due to Russia’s war against Ukraine, and we have revised our forecast downwards accordingly.”

For EU member nations, the situation is like being stuck between the devil and the deep sea. If you grant subsidies and relax growing inflation, you end up taking a lot more debt than you can afford. But if you don’t help your citizens, you end up risking political instability and a likely rebellion.

It is in this context that Germany has issued a warning against relentless spending. The EU has put the Stability and Growth Pact, which requires member countries to restrict public debt to under 60 percent of gross domestic product and budget deficit at up to 3 percent, on hold since the Pandemic. The Pact was to get activated again this year. However, the Ukraine war and the rising energy prices have forced the EU to continue the operation of the stay on the Pact.

Germany’s Finance Minister Christian Lindner has however warned, “The fact that member states are now able to deviate from the Stability and Growth pact doesn’t mean they actually should do that.”

Christian Lindner also asked fellow EU countries to take inspiration from Berlin. He said, “We will not be taking advantage of the general escape clause [but] will return to our national debt brake, which is anchored in our constitution.”

Lindner also opposed an EU proposal to raise new debt and cover Ukraine’s finances along the lines of the €800 billion EU Next Generation Fund that was constituted for rebuilding the economies of the Member States after the Pandemic.

Germany is worried that with rising inflation and the removal of restrictions on spending and borrowing, governments could go overboard. Therefore, it is trying to counsel them against going overboard with public expenditure.

Yet, Germany can afford fiscal discipline amidst growing economic trouble. On the other hand, there will always be a few member countries who would be ready to take more and more debt in order to avoid political instability and this is bound to put the EU in a debt trap as the war continues to disrupt the European economy.