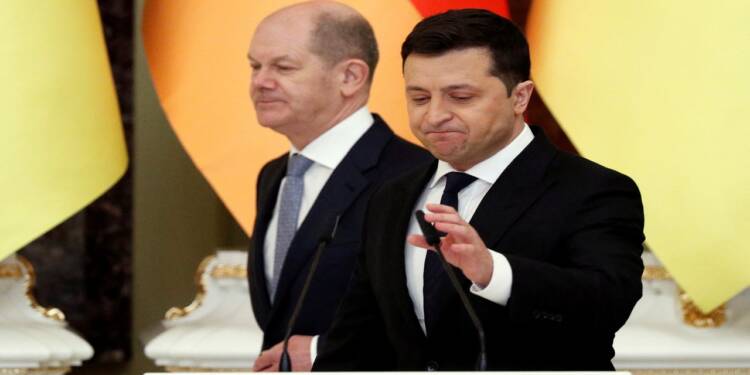 Germany is strangely the only major world power that is running into repeated roadblocks when it comes to sending heavy-duty weapons to Ukraine. The Eastern European country which is fighting for its survival in the face of a brutal Russian invasion has been requesting military aid from just about every country. Germany, being one of the most important players in Europe, was expected to fly in with all the aid that Ukraine needed. After throwing around repeated fits of ‘neutrality’ and flashing the card of its ‘energy dependence on Russia’, Germany finally started claiming that it was sending lethal weapons to Ukraine.

However, here’s where things get disturbingly ridiculous. Germany has merely been claiming that it is sending weapons to Ukraine. For example, Germany had committed to supply 2,700 Strela anti-aircraft missiles to Kyiv in early March. Guess how many were actually delivered? A mere 500.

In fact, those that did land up in Ukraine were either reduced to ashes by Russian missile strikes or were found to be obsolete and non-functional.

This time, Germany promised Ukraine the Marder infantry fighting vehicles (IFVs). It was a bold step and came close to Kyiv’s desperate demands for tanks. Everyone thought Germany had finally decided to go all-out in its aid for Ukraine.

All was going according to the supposed plan. However, Switzerland popped out of the blue and played spoilsport. The Marder, made by German arms manufacturer Rheinmetall, uses ammunition manufactured in Switzerland. Owing to its neutral status, Switzerland restricts the re-export of such war materiel to conflict zones.

So, Switzerland turned down two requests by the German government, which sought its permission to transfer ammunition it received from the IFV’s manufacturer. Swiss authorities said, “Seco received two requests from Germany to pass ammunition [it] previously received from Switzerland on to Ukraine.” Both requests “have been rejected with a reference to Swiss neutrality and bounding rejection criteria of the legislation on military equipment.”

Isn’t it convenient for Germany – all that has happened? Consider this: Germany offered weapon systems to Ukraine with all its might. It was ready to deliver IFVs to Ukraine’s forces. However, in the end, moment, Switzerland slid in and played spoilsport.

Without Swiss ammunition, the IFVs in question cannot be transferred to Ukraine. It’s as simple as that.

Here’s what Germany gains out of the scenario:

So, Germany evades the prospect of getting its energy supplies shut down by Russia, while also appearing to be the hero who tried to save Ukraine. Albeit, fate had other plans, and Berlin wants us to believe that what Switzerland did was a contingency it did not prepare for or anticipate.

Read more: Germany promised to send weapons to Ukraine; all it sent was wishes and cheers

Germany deliberately chose a weapon whose ammunition was manufactured in Switzerland and offered the same to Ukraine. It was well aware of Switzerland’s neutral stance, and in fact, hoped that the Swiss would refuse to allow the re-export of their ammunition to Ukraine.

Berlin takes everyone for a fool. Thankfully, not everyone is falling for its sly games. Soon enough, the whole world will realize what game Germany is playing with Ukraine.