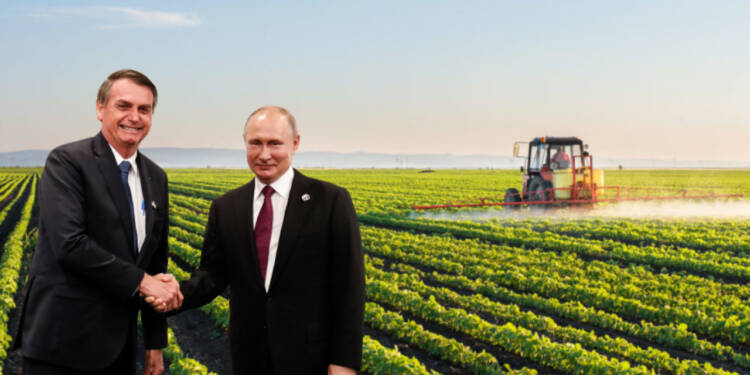 Believe it or not, the food crisis is real in Europe. At present, around 20 million tonnes of grain are stuck in Ukraine as there is no possible route to transport them to other parts of Europe. However, it continues receiving food supplies from Brazil.

This may sound weird, but it’s actually a fact. Brazil is the sole power that is saving the world from a catastrophic food crisis. To the European Union and the world, Brazil is the fourth-largest food producer. The country produces all of its own basic foods and is the world’s leading producer of bananas, chocolate, cassava, coffee, corn, maize, rice, soybeans, and sugar.

Although the majority of these products are consumed in the United States, a significant portion of them are exported, such as oranges, palm oils, garlic, peanuts, and tea. Right now, none of these exports is halted and the reason is quite easy to guess, it didn’t fall for Western Propaganda.

Brazil’s agriculture is one of the main pillars of its economy. The country needs a steady supply of fertilizers to power its mighty agricultural industry. For this, the country is largely dependent on Russia as Moscow continues to be its prominent fertilizer exporter that accounts for 44 per cent of total fertilizers Brazil consumes each year.

Ever since the Russia-Ukraine war began, Brazil’s President Jair Bolsonaro stated that his government and his country would remain neutral, avoiding condemnation of the attack.

Not only this, but Brazilian President Jair Bolsonaro also had a meeting with Russian President Vladimir Putin in Moscow on Feb. 16, and on the occasion, Bolsonaro stated: “We are eager to cooperate [with Russia] in various fields. Defence, oil and gas, agriculture. Brazil stands in solidarity with Russia.”

The US government had condemned the visit of Bolsonaro. But, what went unnoticed was that Brazil somehow secured its fertilizer supplies from getting affected. Brazil still needs to import 97 per cent of the roughly 10 million tonnes of potassium it uses for crop production each year, making it the world’s largest importer.

Brazil’s Agriculture Minister Tereza Cristina Dias has called on countries to find an international solution to the issue, noting that a shortage of fertilizers would provoke “food inflation and potentially undermine food security.”

Yes, Brazil itself has many untouched reserves of Pottasium inside the Amazon. But, we all know if Bolsonaro touches Amazon, how the environmentalists will rip him apart.

So, by making an agreement with Russia, Brazil has prevented potassium mining too which could have harmed the Amazon and led the environmentalists to throttle him down.

Read More: Brazil’s right-wing ecosystem has collapsed and Bolsonaro is to be blamed for it

Brazil is the EU’s top importer of agri-food since last year. Although, it can’t replace Russia’s and Ukraine’s agricultural supplies. Still, it’s enough to keep the EU running.

If Brazil had to scale down its produce because of a lack of fertilizer, that would certainly be bad news for a global food crisis. Although it’s not happening, it could have become a reality if Brazil had sided with the west.

The war in Ukraine, coupled with the West’s economic sanctions, has put the world’s food security and supplies at great risk. These sanctions were meant to punish Russia for its invasion of Ukraine, but as a consequence, they are causing a serious danger to the world’s ability to feed itself.

Not only this, but Brazil is also seeking international solutions to an emerging food emergency crisis that, in the worst scenario, could see millions of people dying from starvation, especially in the poorer sections.

In United Nations, the Brazilian government had submitted a proposal to the United Nations’ Food and Agriculture Organisation that excludes fertilizer products from any sanctions imposed on Russia.

Read More: Elon Musk’s visit to Brazil creates a political tsunami for Lula and his supporters

In the end, the world should thank the Brazilian government for not siding with the West and pushing sanctions against Russia. President Bolsonaro has avoided an acute food crisis in the world by securing the country’s stockpiles with the help of Russia because of which, the world is still able to run.