Zelensky is probably planning to flee to Switzerland 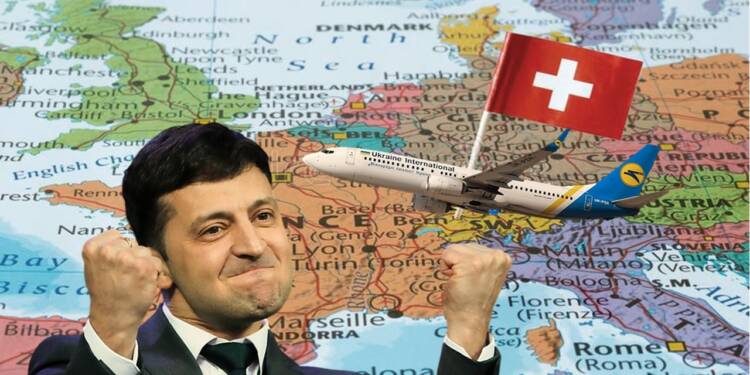 Since the fall of Mariupol on 16th May, Russia has been moving with monstrous precision when it comes to ending their touted special military operation in Ukraine. Volodymyr Zelensky is buried in grief and has discerned that no weapons of resistance will put a stop to the Russian forces lurching forward. More macabre doomed in when the US president himself started spouting out Pessimistic rhetoric asking Ukraine to give up its land to Russia to craft a better ending to these four months-long wars in eastern Europe.

The US and other global forces have petered out seeing the new Russian ploy of blockade and bombing of food exports. Many countries couldn’t muster the nerve to fight this new Russian mechanism and thus changed their tonality towards Ukraine making the cautionary tale of Zelensky to take a new fall.

And now, The Ukrainian president is trying new spheres of tactics and is fancying a safe space to hide from the oncoming Russian onslaught. The current move curated by Zelensky has zeroed in Switzerland as the spot of asylum and the expose’ is startling considering the previously held stance of the once christened ‘resolute leader’ of Ukraine.

Reports have headlined about Zelensky’s inner coterie of trustful officers buying up expensive properties in Switzerland. Well, it was no big matter of surprise since it ran through anyone with a close eye on the happening in Ukraine that the same storyline would have occurred at some stage or other. But if the details emerged are to be trusted, Zelensky has stitched a chapter in duplicity playing with the trust of the people he vowed to protect.

As per emerging reports, deal of Zelensky in Switzerland is through his right-hand man and advisor Dmitri Alexandrowitsch Razumkov. It is also to be pointed out how Zelensky voiced his discontent on Switzerland’s espousal of neutrality that severed the prospect of Ukraine receiving critical military support from Germany and other nations within the European hinterlands.

Many may judge Zelensky as an inept former comedian with a serious lack of geopolitical nous to counter a formidable Russian offensive. And to an extent, the happenings within Ukraine do suggest the same, but Zelensky should be never judged naïve. He minted more money than anyone in this war. In the garb of assistance, money poured in from all quarters of the world. Despite the pain that was about to fall on Ukraine, he deceived the people with big talks of optimism sticking together with the tacit approval from the west.

Read more: Switzerland issues a clean chit to Russia over Ukraine and drops all sanctions

From the inception of the war, Zelensky has been using fictional tools against the Russian forces and has been seen giving tall talks of taming the lion in Russia. But after getting the grip on reality and seeing how labouring it is for Ukraine to put a good fight against Russia, the Western forces which once chiselled out a warrior in the Ukrainian president is distancing away from any call for help.

Now it is a point of no return for Ukraine and Zelensky is diving into the greener pastures of Switzerland with all his bagful of money reared in the garb of assistance. The people of Ukraine will see no end to their depravity. Kyiv is falling but not Zelensky.

Biden’s peak democracy: Venezuela will legally sell its oil to US and Europe