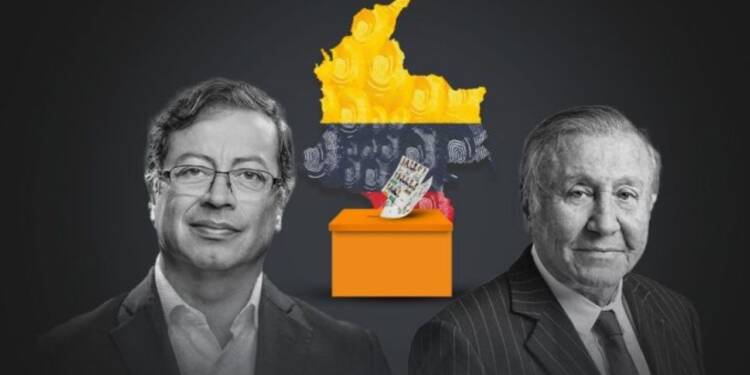 Elections for the President of the Republic of Columbia are currently underway. The mainstream global media rarely covers the elections in such countries. However, such elections, specially the one that’s currently underway in Columbia, play a crucial role in geopolitics across the globe.

In 2018, Iván Duque Márquez was elected as the candidate from the Democratic Centre Party, backed by his mentor and the former President Alvaro Uribe. He was elected despite being relatively lesser known till a year before the elections.

This year’s elections are a bit different though, and also quite entertaining. There is a fight between two candidates. Leading in the opinion polls is Gustavo Petro, running for a coalition of the Left-wing parties, that call themselves ‘Historic Pact’, while his opponent is Rodolfo Hernandez, a controversial ex-mayor, and a ‘Tik-Tok King’. Yes, you read that right!

The second runoff election is supposed to happen on the 19th of June, that’s just a few days from now. This is the story of Columbia Elections, that the world knows very little about.

In Columbia, the Constitution restricts a person to a single Presidential term. So, the outgoing President Iván Duque is restricted to a single term. Earlier, there were six candidates vying to succeed him in office.

Gustavo Petro, a leftist former rebel and leader of the M-19 guerilla movement, came out as the top contender in the first round of Colombia’s presidential election on 29th May. Petro had 40.3 percent of votes, with 99.9 percent of ballot boxes counted on Sunday.

Now, the leader is all set to face a populist businessman in a second-round of showdown on June 19. The populist Businessman is a ‘Tik-tok King’, Rodolfo Hernandez who has finished second in the first round of voting, quite unexpectedly.

Hernandez secured a second-place result in the first round of the country’s presidential elections in late May, garnering 28 percent of votes. Hernandez was not seen as a viable contender until three weeks before the first round, but now he has proved that he indeed has the backing from  the Columbian citizens that could perhaps get him elected as the President.

Hernandez was backed by another contender Federico Gutierrez which has most possibly helped him increase his vote-share.

Read More: A massive wave of communism had begun sweeping South America, but now, it has hit a dead-end

The current President Ivan Duque’s disapproval rating continues to remain above 77% and the social and economic crises faced by Colombians in the pandemic have paved the way for Gustavo Petro to win in next year’s elections.

The role of Social Media and Violence

Rodolfo Hernández’s unexpected success as an independent candidate who boycotted the previous TV debate can be attributed due to his constant interaction with the Columbians on social media. Early in his campaign, he went from being a relatively unknown contender to being nicknamed “the king of Tik-Tok.”

He was able to reach out to a large number of young voters who otherwise were unlikely to support the oldest contender in the race for the presidency.

Colombia has seen an increase in the armed group violence in the countryside as poverty and inequality deteriorated during the COVID-19 pandemic. Gustavo and other opponents called this a result of the government’s inability to implement the country’s 2016 peace accords. Meanwhile, last year’s enormous anti-government rallies garnered international headlines after being met with a deadly retaliation by Colombian security forces.

Petro and Francia Marquez, his vice-presidential candidate had to speak to large audiences behind police shields after alleged assassination plots and threats.

It’s not clear yet who the winner would be. However, it looks like Gustavo Petro might be the winner of this race. The elections of Columbia will also have an effect on geopolitical relations and most importantly on the United States. For years, Columbia despite having a right-wing government, stood firmly with the USA. However, now when the Left is on the verge of a victory, the relations between the two allies may change.